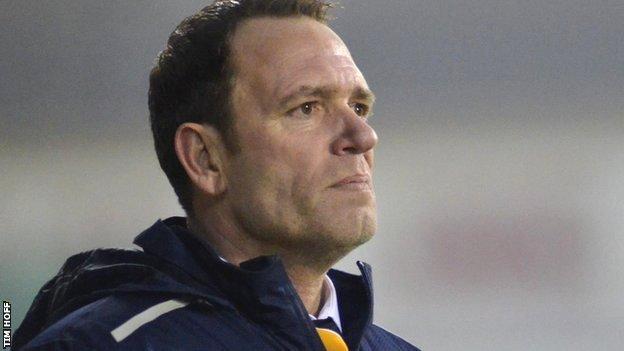 Greene was named interim boss in March and has won four and drawn one of six games to steer the club away from the Blue Square Bet North relegation zone.

"We like how Dennis has operated; he seems to be getting the best out of the squad," Newton told BBC Lincolnshire.

"I think we all can't quite understand how it has turned around so quickly."

People seem a lot more positive. He is a nice guy; he has quite a relaxed style which suits the fans and players

Greene, who has now signed a deal for next season, has taken Boston to 12th in the table, 18 points clear of the bottom three.

When he took over, after Graham Drury's 13-match spell in charge, they were 10 points above the relegation zone, but all the teams beneath them had games in hand.

But Newton said Greene's arrival has boosted everyone at the club and he said they are already focused on challenging for the play-offs next season.

"That's what we all want," Newton said. "We will finish mid-table and that's after a poor season so there cannot be that much wrong with what we have got, so not a lot will need changing.

"He has identified the areas he wants to strengthen next season and his track record is that of a winner.

"We have had a chat about where we see the squad and where it needs to be for us to be competitive next season.

"We are all in agreement of what needs to be done and Dennis is quite confident he can turn things around."

Newton said the atmosphere around the club appeared to be more positive since Greene took charge of the team.

"He is a nice guy, he has quite a relaxed style which suits the fans and players, but he is also confident. He has a good track record and is confident he can get the right players to be more successful," he added.

"He is the sort of guy I would want to play for that and that is the case with the players. He fills people with confidence and that is half of it. He lets people play and he wants to play football."