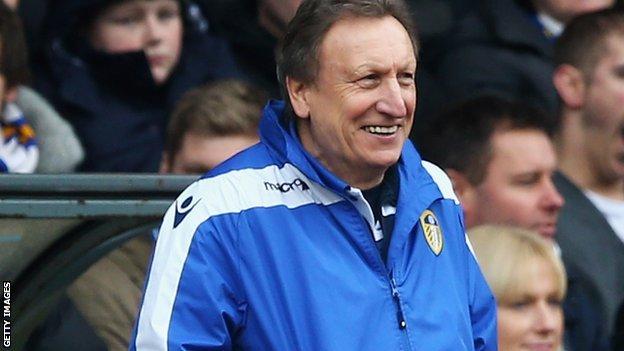 Former Leeds United boss Neil Warnock says there is a chance he could return to football, even though it is unlikely he will manage again.

The 64-year-old left Elland Road on Monday after a 2-1 defeat by Derby.

Speaking to BBC Late Kick Off Yorkshire and Lincolnshire before his departure, he said: "You never say never.

"If you look between the board and the manager, there's a gap there. I wouldn't mind being involved in something like that."

Warnock parted company with Leeds after the defeat by the Rams left them eight points adrift of the Championship play-off places and just five clear of the relegation zone, with six games remaining.

"It's difficult because in their situation they've got to get the right man and some of them might be in a job at the moment.

"I don't think anyone could get any more out of the players that are there at the moment."

Warnock admitted he was frustrated at being unable to strengthen the squad to the extent he felt was necessary.

The former Sheffield United, Crystal Palace and QPR boss suggested he did not get the financial backing required.

GFH took over in December, but did not spend any money on transfer fees in the January window.

"They've wanted to come in and have a look but I was hoping that we'd be able to do things straightaway," he added.

"We managed to get Jerome Thomas in (on loan) and they were instrumental in that, and we had our best run of the season then, but when he went back to West Brom we weren't able to bring anyone else like that in.

"They're aware we need one or two players and they will support the next manager, I'm sure."