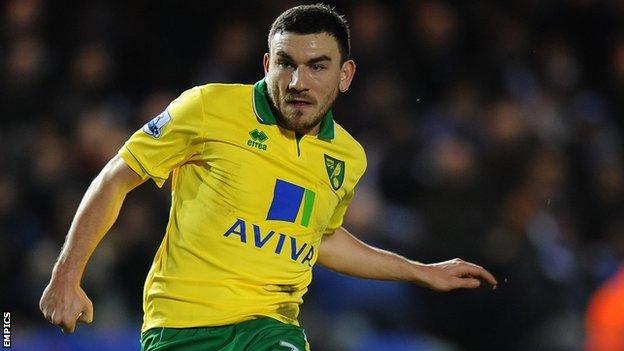 Norwich City midfielder Robert Snodgrass is convinced his side will retain their Premier League status.

The Canaries have won only one of their last 14 league games and are four points above the relegation zone.

"I'm not worried. We should just take each game as it comes," Snodgrass told BBC Radio Norfolk.

"We know we'll get points before the end of the season. We believe in ourselves and if you don't believe then there's no point being here."

City's only top-flight victory in 2013 is a 2-1 success against Everton in January, and Chris Hughton's men have scored only once in their four games since.

was their eighth defeat on the road this term and puts them four points above the 17th-placed Latics.

"You have to be confident that you have enough in the team and the squad to get the points that are needed - and absolutely we have," said Hughton.

"But we have to show it. We've got seven games left, four of them are at home, and our season was always going to be about our home form.

"Any defeat is a damaging defeat, but it's how you react from that."

Norwich are the division's joint lowest scorers, level with QPR on 28, and Hughton accepts that they need to improve their form in front of goal.

"The stats don't lie," he admitted.

"Our general play has been good enough, but to win games you have got to score goals and we're finding that a bit more difficult at the moment."