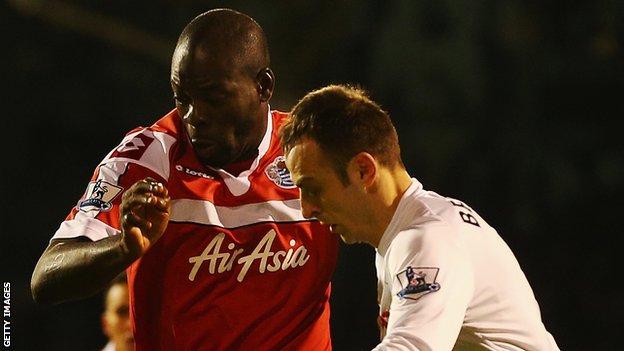 QPR defender Chris Samba has told fans to "get over" the issue of his wages after apologising for his error-strewn display in the damaging loss to Fulham.

Samba, 29, conceded a penalty from which Dimitar Berbatov opened the scoring, then lost the ball to the Bulgarian striker, who made it 2-0.

"I am sorry I let the side down, really upset with my first-half performance."

The Republic of Congo international added: "Tell me what is a £100k performance? See everyone talking about mistakes, like footballers cannot have an off day on the pitch. We are human like all of you. Grow up some of you, please."

The former Blackburn centre-back also wrote, and then deleted, a swear word-filled tweet to a follower he felt was racially abusing him.

He later said on the social media tool that he did not deserve to receive that type of abuse "for a game of football."

The Congo international also offered his Twitter followers a chance to win two tickets for a future Rangers game, followed by a meeting with the defender and entry to the QPR players' lounge, "as a sorry for yesterday's game".

Samba signed a four-and-a-half-year deal in January, when he joined QPR from Russian side Anzhi Makhachkala for a club record fee of £12.5m.

But despite the large outlay in the winter transfer window on Samba and a number of other expensive additions, results have not improved and QPR remain second from bottom in the Premier League table after the 3-2 defeat at Craven Cottage on Monday.

Manager Harry Redknapp was furious with his players after they gifted the hosts a 3-0 lead as they suffered a loss that leaves them seven points adrift of Premier League safety with seven games left.

"We gave away the most terrible goals I've ever seen since I've been managing a football team," the 66-year-old said.

"A penalty, losing the ball and an own goal. Scandalous goals. It was an absolute disaster."

A Clint Hill own goal followed Samba's mistakes and, although QPR hit back through Adel Taarabt and Loic Remy, the damage had been done.

"We got a goal back and came back in the second half and absolutely murdered them," added Redknapp. "When it went to 3-2 I could only see one winner, I wouldn't have even taken a draw at that point.

"But I was disappointed with the last 10 minutes. Christopher Samba put himself up front and then we started launching balls up and that is not how we play."

QPR face fellow strugglers Wigan on Sunday, a game Redknapp admits they must win to stand any hope of survival.

"We are not giving up," he said. "We have to beat Wigan on Sunday, that is where we are at now. We need another 14 points from the remaining games and we have to try to do that.

"We have to win four and draw two but it is getting harder."