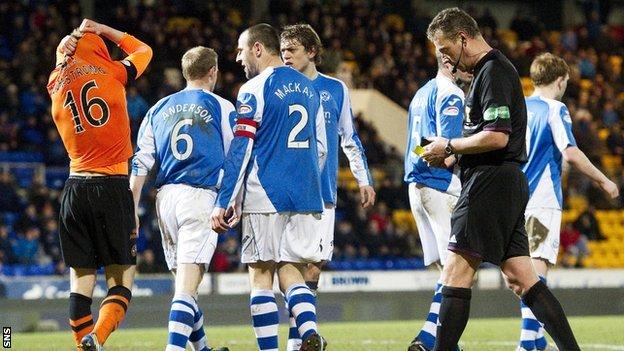 Stuart Armstrong was sent off for United in between the goals, with the midfielder's second booking a punishment for simulation.

"I thought there was a lot of inconsistency with decisions, some were quite baffling," said McNamara.

"Stuart's first booking was a similar one we had with [a challenge on Michael] Gardyne and it went unpunished.

"Even at the end, we're breaking away and, rather than play they advantage, he [the referee] calls it back and books him [Murray Davidson for a foul]. There's no advantage for us.

"The lad that scores the goal runs into the crowd. We had a lad booked the other week in the [Dundee] derby for putting his finger to his lips.

"So, you're looking for consistency throughout the 90 minutes and I don't think we got it."

Gauld marked his first United start with his debut goal.

"He did well," added McNamara. "I'm disappointed for the lad. It would've been a good story for him to score the winner.

"I think it was a fair result. I'm disappointed to lose it [the goal] in the way we did at the end, disappointed with a lot of things. I thought we could've held on."