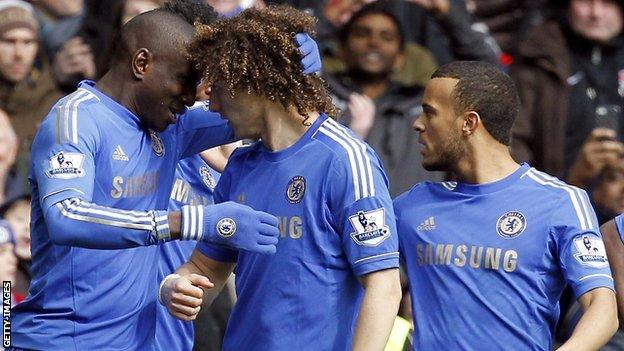 Demba Ba's goal early in the second half settled the quarter-final replay at Stamford Bridge and sets up a meeting with Manchester City at Wembley.

Benitez said: "The priority for us is to finish in the top four but in a top side you have to keep in every competition and try to win it."

Chelsea are now unbeaten in 29 FA Cup games (excluding penalty shootouts). It is the longest ever run without defeat by a single side.

The game with Manchester United was played less that 48 hours after Chelsea's defeat at Southampton and Benitez is concerned that a heavy programme will bring the risk of injuries.

Ashley Cole limped off in the first half against United with a hamstring strain that is likely to keep him sidelined for at least two weeks, while fellow England defender Gary Cahill is also sidelined for a similar period with a knee injury.

With tongue in cheek, Benitez said: "With Ashley's kind of injury it means at least two weeks out - which means about 20 games for us."

Meanwhile, the Spaniard insists the win against United was not vindication for his decision to shuffle his side against Southampton.

"We don't need to justify anything," Benitez said. "We have to make decisions and we have to use a lot of players, especially when you are playing two games in 48 hours.

"You can't kill players by playing them two games in a row and then lose them for 15 days. If we can manage the squad and don't have injuries we will be fine. Cahill will be out for 15 days and Ashley the same so we have to manage with other players."

Benitez was delighted with Ba's goal - and also with a stunning one-handed save from goalkeeper Petr Cech in the second half that kept out Javier Hernandez's header and preserved Chelsea's lead.

He said: "It was a great goal and a great save. Ba's goal was very important and showed great technique. Credit to Petr as well, but also credit to the rest of the team. When you have a good goalkeeper it always helps."

United manager Sir Alex Ferguson said: "We were comfortable in the first half and I couldn't see them getting into the game or being any great threat to us. But the goal, as it always does, changed the game.

"We spoke about Ba and the experience we had with him a couple of years ago at Newcastle when he scored exactly the same type of goal. We were caught napping to be honest. It wasn't a good start for us right at the beginning of the second half.

"After that I think we lacked the composure to win the game and create proper openings. We had a lot of possession but didn't make the best use of it and they caused us quite a few problems on the counter-attack.

"To be honest with you, for the 90 minutes I thought only Antonio Valencia reached the standard that we expect of them. Phil Jones, for a good part of the game, and David De Gea did well. But in terms of the 90-minute performance, Antonio was the only one.

"We need to forget this result and look forward to the game with City. A positive result for us next Monday will just about seal the title for us."