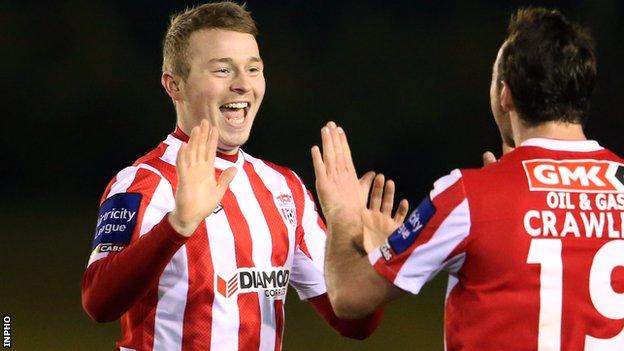 Michael Rafter bagged a double to give second-placed Derry a comfortable Premier Division victory over Bray.

Rafter put the Candystripes ahead six minutes later with Bray keeper Sean Holmes at fault for failing to keep out the the striker's long-range shot.

The double was completed on 55 minutes as Rafter headed in from Patrick McEleney's cross to the back post.

It was a deserved victory with Derry rarely threatened by a disappointing Wanderers outfit.

Patrick McEleney fired over and Rafter had a header saved before Byrne's lob found the top of the woodwork.

Stand-in keeper Holmes had a moment to forget when Rafter's effort from 30 yards managed to escape his grasp, with the ball dropping into the net.

Patrick McEleney sent a curling shot over and Madden headed straight at Holmes as the hosts continued to dominate.

There was no fortune with Rafter's second goal, the striker involved in a slick build-up before applying the finish.

Bray failed to muster a response and Derry went in search of a third, with Mark Griffin heading wide and Holmes denying substitute Michael Duffy.