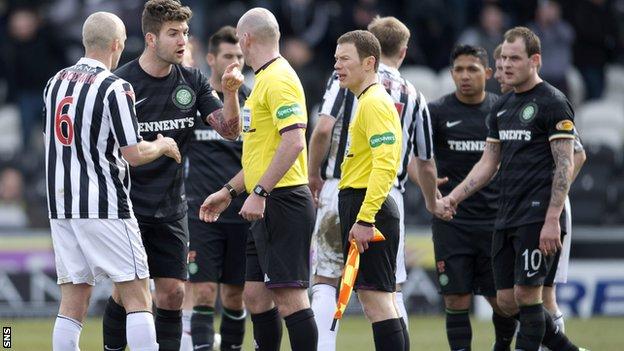 "It's a challenge to play against Celtic, and for those little breaks and decisions to go against you, it's very frustrating, Lennon told BBC Radio Scotland.

"I just felt the big ones [decisions] were going against us today."

"I'm sure the officials will look at their own performance," he added.

"Everybody within the game of football - coaches to players to officials - knows there's always room for improvement for us all.

"It's part and parcel of the game that decisions are either with you or against you.

"But there were too many to speak about, in terms of the air time that we have here."

The Paisley side had the ball in the net before half-time when Teale's delivery floated directly in at the far post, but referee Bobby Madden judged that Paul Dummett had fouled Celtic goalkeeper Fraser Forster in the process.

"Our player's actually just stood his ground and it's Emilio Izaguirre that's actually pushed him into the goalkeeper," Lennon explained.

Shortly after, another Teale cross clearly hit the arm of Samaras in the box, yet referee Madden waved the penalty claims away.

Lennon added: "I certainly saw the arm coming out and it [the ball] striking it. We've had some poor penalty decisions go against us.

Two calls which certainly did not go against St Mirren, however, were a straight red card to Celtic's Victor Wanyama for a seemingly soft foul on McGowan and the penalty award for the Buddies' equaliser.

Madden awarded it for Izaguirre's trip on St Mirren forward Esmael Goncalves, but it was questionable whether there was any contact and whether it was actually in the box.

"I'm led to believe we also maybe got a wee bit of fortune for the penalty that we did get, " said Lennon.

"We're absolutely delighted to get something out of the game, it's the least we deserve.

"There was always that talking point about how they were going to react after the cup win, but they reacted in the manner I thought they would."

St Mirren's next Scottish Premier League game is at Kilmarnock on Wednesday.