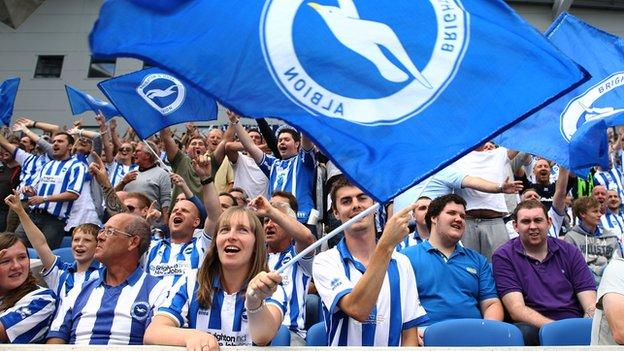 Brighton fans have been subjected to homophobic insults by rival supporters in over half of the club's games this season, according to two fan groups.

They submitted the report to the Football Association on Tuesday.

The report says they have been subjected to some form of homophobic abuse in at least 57% of their matches.

Brighton is well known for having a substantial lesbian, gay, bisexual and transgender (LGBT) community and is often referred to as "the gay capital of Britain".

The report says chants range from "does your boyfriend know you're here", to "you're just a town full of faggots".

A joint-statement from the BHASC and GFSN reads: "It wouldn't be described as 'banter' if the taunts and chants were about skin colour and something would have been done by now to stop it.

"Brighton & Hove Albion Supporters' Club has spent over 15 years trying to get the authorities to take this regular abuse of one club's fans seriously.

"We would like our fans to be able to go to games with kids or their grandparents and not hear much of the stuff we are subjected to - it's our basic human right.

"Our campaigning with the help of the Football Supporters' Federation has led to 'homophobic abuse' being included in the list of unacceptable behaviour in ground regulations, yet many clubs, their stewards and their fans do not seem to know what constitutes 'homophobic abuse'."

The FA stepped up efforts to fight homophobia in football by providing clubs with a toolkit, backed by Minister for Sport Hugh Robertson, in February.

The resource was sent to the 92 clubs in the Premier League and Football League as part of the Football v Homophobia campaign and 29 of the 92 clubs signed up to the scheme in the first month.

The 43-page document carries advice on how to create good relations with the LGBT community.

Former Leeds winger Robbie Rogers told the Guardian this week that remaining in football after publicly declaring your homosexuality is "impossible".

The American also admitted he was concerned by the reaction of opposition fans and the media, adding: "I wouldn't want to deal with the circus. Are people coming to see you because you're gay?"