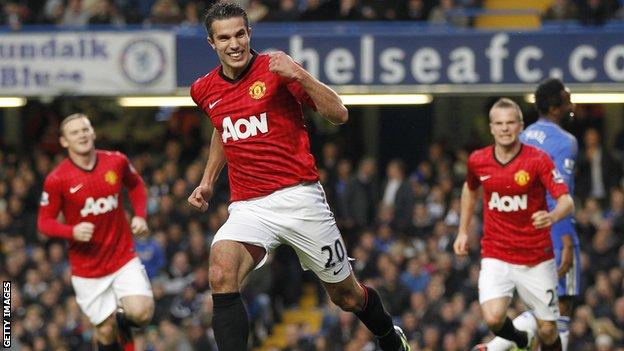 Manchester United striker Robin van Persie says Monday's FA Cup quarter-final replay against Chelsea will be affected by the fact it is both teams' second game in 48 hours.

Fixture congestion has resulted in the tie being scheduled for two days after Premier League fixtures.

"These games are just too close to each other," said Van Persie.

Fifth round: Middlesbrough (a) 2-0

"People have to realise they can't expect a great game of football because it is not possible."

With Chelsea still involved in the Europa League and Uefa frowning on fixtures between England's top clubs taking place on days designated for the Champions League, the Football Association had little option but to arrange the replay for Monday.

On Saturday, Manchester United beat Sunderland 1-0 in a game that started two hours ahead of Chelsea's match at Southampton, which ended in a 2-1 defeat for Rafael Benitez's side.

"Normally on the second day your muscles are quite bad, but now we have to play at this certain time," added Van Persie, an FA Cup winner with Arsenal in 2004-05.

"It is a shame but we can't do anything about it because there are Champions League games in midweek and Chelsea are still in the Europa League.

Chelsea, who overcame Liverpool in the final to win the FA Cup last season, came from 2-0 down at Old Trafford on 10 March to force a replay.

Benitez made seven changes to his side at St Mary's Stadium, with David Luiz, Ashley Cole and Eden Hazard starting on the substitutes' bench ahead of the United replay.

The Spaniard bemoaned the need for his players to play two matches in the space of 48 hours.

"When you don't have one or two players you have to manage the squad," he said.

"The day after a game you feel tired, two days after you feel even more tired. That is the reality. The second day will be really tough for everyone."

The winners of the replay will meet Manchester City in the semi-finals.