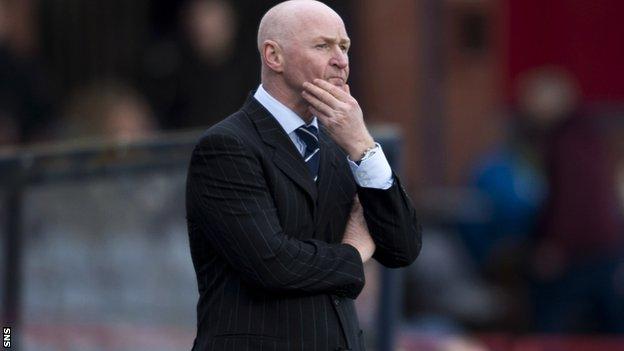 Relegation now seems assured with Dundee 13 points adrift at the bottom of the table.

"I've to report back which players I would recommend to stay," said Brown.

"The vast majority I've been pleased with, but the fringe players have got to show me a bit more."

A headers from Michael Higdon and Nicky Law's bracepiled misery on Dundee's forlorn position, but Brown insists the squad still have plenty to play for.

"We knew we had to win the game to put pressure on the teams above, but we knew it was going to be a tall order," said Brown.

"I had a board meeting yesterday and I put out everything I've seen since I've been here.

"I've learned a lot about the guys who have kept going when the heads could have gone down and it's stuff we can work on during the week.

"I've got to say, Motherwell have caused every team in the division problems this season so we've got to work at certain areas, tighten up at the back and take the opportunities when they come our way."

Brown also revealed that the club had offered former Andrew Barrowman a deal until the end of the season, with the forward having been made redundant by financially troubled Dunfermline.

"Andy has two or three options," explained Brown. "We've put to him if he wants to sign until the end of the season, so we'll see what happens there."