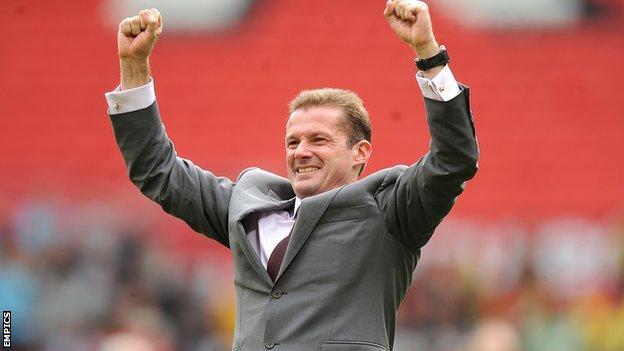 Westley left Broadhall Way for Preston in January last year after taking Boro from non-league to League One.

"It will be tough to get into the Championship, but I think Stevenage can," he added.

"It's a big ask for Stevenage to be a successful Championship club. But you never say never."

Westley lasted just 13 months in charge at Deepdale, closer to the League One drop zone than the play-off places.

"Certainly I felt that Preston was a club more likely to get into the Premier League," he said.

"The infrastructure and history the club's got shows it's got the potential to get there, whereas Stevenage is a much slower burn if it's going to think about those dizzy heights."

In his first spell at Stevenage between 2003 and 2006 he took the Hertfordshire side to the Blue Square Bet Premier play-off final.

He returned in 2008 and went one better, winning promotion to League Two in 2010 and then following that up by securing a place in League One a year later.

"I'm coming back to a club I've enjoyed a lot of success at," said the former Wycombe striker.

"I'd like to think my two spells, whatever people think of them, the progress can be acknowledged.