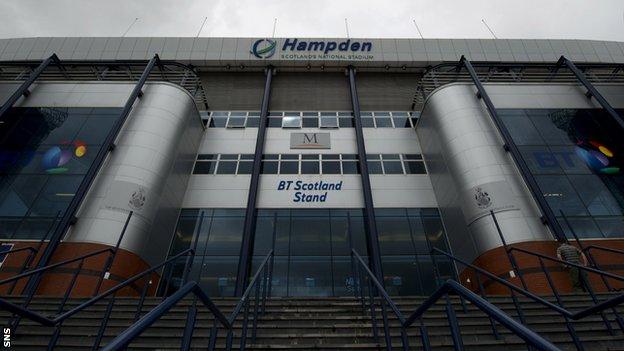 It comes in response to the suggestion any revamp could be put back a year.

"It's not acceptable to start saying 'well, let's just push it back a year because we can'," Doncaster said.

"The deal agreed back in January was about a package of measures and one of those measures was implementation this summer. I think we should focus on delivery of the deal for this summer."

And Doncaster believes if it does not get the green light, then plans for any league reconstruction whatsoever could be shelved.

"What I expect to happen is that the 12 SPL clubs will meet on 15 April at 10:00 GMT and they will decide whether they wish to see the package of measures go forward or not," he said.

"If 11 clubs put their hand in the air and say 'yes', then it's in the court of the Scottish Football League to decide.

Were 11 SPL clubs to give 12-12-18 the thumbs up on 15 April, the SFL clubs would convene later that week and vote on whether they supported it.

It would require three quarters of the SFL clubs to support the idea for the whole plan to be sealed.

Doncaster rejected the idea that it is too tight a timescale to make changes in time for the new season beginning on 3 August.

Rather, he wants those involved to appreciate the benefits the 12-12-18 system will bring.

"We need to go forward to 15 April with confidence, with enthusiasm, with momentum and try to deliver something which is going to deliver so many things that everyone wants, and I include supporters within that," Doncaster said.

"All of those things, which I think we would unanimously agree are the way forward, are delivered as part of these proposals."

Hamilton chairman Les Gray and his Falkirk counterpart Martin Ritchie have both vowed to explore an SPL2 option if immediate change is blocked.

But Doncaster added: "Anything you talk about as an alternative to what's on the table at the moment is a distraction."