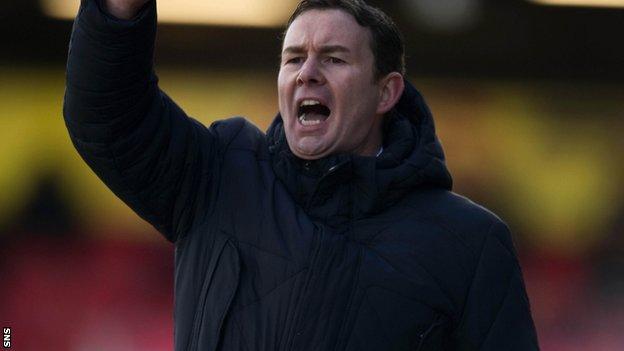 And County could not find a leveller with Killie goalkeeper Cammy Bell making some impressive saves.

"People maybe think that when you've had a defeat you make excuses, but I don't think it was an excuse today," said Adams.

"Kilmarnock haven't really troubled us. If we had got the goal to equalise, I'm sure we would have gone on and won the match because Kilmarnock would have had to come out and come at us."

Bell denied Richard Brittain, Sam Morrow and Steffen Wohlfarth to keep his side ahead.

Adams praised the resilience of the visitors and insisted his players are still on track to seal a top-six place in the Scottish Premier League.

With 45 points on the board from 32 matches, one more victory from their final match before the split will guarantee a place in the top half of the table.

"Kilmarnock defended well in the box with large numbers - maybe too many at times - and there wasn't a real clear-cut opportunity," said Adams.

"We could have been here until tomorrow and not scored.

"But in the end, we're a step closer to top-six football after the other results."