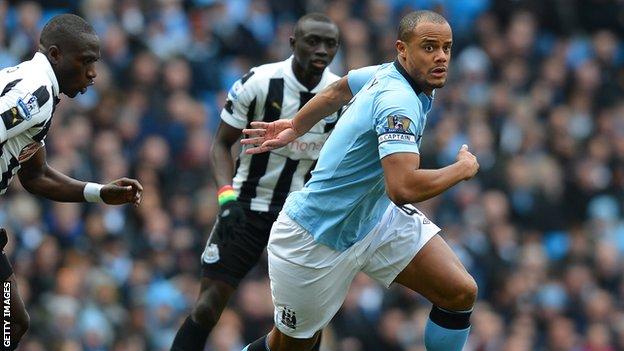 Manchester City boss Roberto Mancini feels the absence of Vincent Kompany and Yaya Toure for long spells of the season has cost his side in the Premier League title race.

The defending champions are 15 points behind leaders Manchester United, with eight games remaining in the campaign.

Key duo Kompany and Toure both returned for Saturday's 4-0 win over Newcastle.

"Some players are very important. If they don't play for four of five games, there is a problem," said Mancini.

Kompany turned in Gareth Barry's second-half shot to score City's third goal against Newcastle as he made a goal-scoring return after two months out with a calf injury.

The City skipper's return to action for Belgium in their midweek World Cup qualifier against Macedonia had annoyed Mancini but he showed no ill-effects from his international duty.

Mancini also recalled Toure for Saturday's win after he was ruled out of the Blues' defeat at Everton through illness. The Ivory Coast midfielder also missed four Premier League matches when he represented his country in January's Africa Cup of Nations.

"We were without Vinnie for 60 days," said Mancini.

"That was very bad for us, like when we lost Yaya for a month for the Africa Cup of Nations."

He said: "He gives them a presence and assurance at the back that perhaps they have missed in other matches."

Mancini, whose side dropped 10 points in the six league games that Kompany missed from the start of January, said he felt United "deserve to be top of the table".

But he added: "I am frustrated because we have lost a lot of our players through injury many times at crucial moments.

"If we had all our players ready, like they were against Newcastle, then it would have been easier for us."

If United win the Manchester derby on 8 April, they will need only four more points from their remaining seven games to make sure of the title. Mancini has all but given up on his side's defence but insists they still have lots to play for between now and the end of May.

"It was a good performance against Newcastle. We played well and it was not easy because they are a good team," added the Italian. "But maybe it is too late for us.

"We have two months, eight Premier League games and the FA Cup to go. It is important we get second place and to win the FA Cup semi-final [on 14 April]."