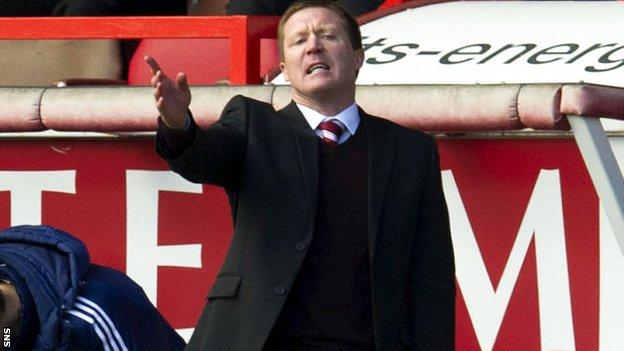 Hearts manager Gary Locke was disappointed his side did not match up to Aberdeen during much of the Scottish Premier League encounter at Pittodrie.

Two Niall McGinn goals gave the Dons their first win in 10 meetings against the Tynecastle men.

Locke told BBC Radio Scotland: "We said before the game it's who wants it more.

I'd be really worried if we weren't creating any chances

"The disappointing thing is that, especially in the first half, we were second-best in too many positions on the pitch."

The match was Craig Brown's last home game in charge of Aberdeen, but Locke did not feel any extra effort from the home side to give their boss a good send-off should have made a difference to Hearts.

"We've lost two bad goals. There were a few choice words said at half-time and I felt we did a bit better in the second.

"It's not as if we never created chances, but when you get chances you've got to score.

"I'd be really worried if we weren't creating any chances but obviously we've got to try and stick one or two of them in the net."

One plus for Locke was the return of Jamie Hamill, who came off the bench to make his first appearance in almost a year following a knee injury.

"He came on and showed the urgency and desire that was required," said Locke of Hamill.