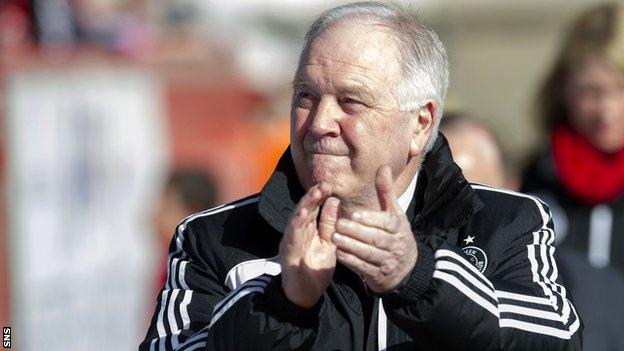 Niall McGinn's brace helped the Dons beat Hearts in Brown's final home match in charge, their first win against the Tynecastle side in 10 meetings.

"I've left a legacy there for Derek McInnes," he told BBC Scotland.

"Derek will be trying to see where he can strengthen but he'll see the nucleus of a very good team is here."

And Brown added: "If nothing else, I've left him with Niall McGinn, who I think is the best signing this season. He's proved that again with two fine goals.

"Niall McGinn is deadly when he gets near the goal."

The Northern Irishman's first came in the opening 10 minutes and finished off an excellent team move involving Ryan Jack and Jonny Hayes.

In the second-half he got his 19th of the season, this time a fine solo-effort.

Brown became manager at Pittodrie in December 2010 but, until this match, his Aberdeen side had failed to register a win or a goal against Hearts.

"I don't think celebrations are required - it's a game and it's my job," he said.

"It was a good send-off because we won fairly comfortably. But that's nothing to do with me leaving.

"The annoying thing is we've had, I think, six 0-0 draws here and in at least four of them we played better than we did today.

"It's very frustrating that we've dominated other games and did not take the three points. Here we got three for not playing quite so well but taking our chances.

"I've enjoyed the experience today because it was a victory. What really pleased me was the fans seemed to be happy."

The 72-year-old felt Aberdeen had two goals wrongly ruled out for offside and also defended McGinn, who was booked by referee Willie Collum for simulation after Danny Wilson's challenge in the penalty box.

"His momentum took him on, he wasn't diving. He was falling after going at pace and he's upset he got booked for simulation. McGinn is not a diver."

The Dons now sit seventh in the Scottish Premier League, level on points with sixth-place Kilmarnock with one game to go before the league splits.

That fixture is against Dundee United at Tannadice - Brown's final match as Aberdeen manager.

"There are slim hopes [of a top-six place] and while there's hopes we'll continue to do our very best," he added.