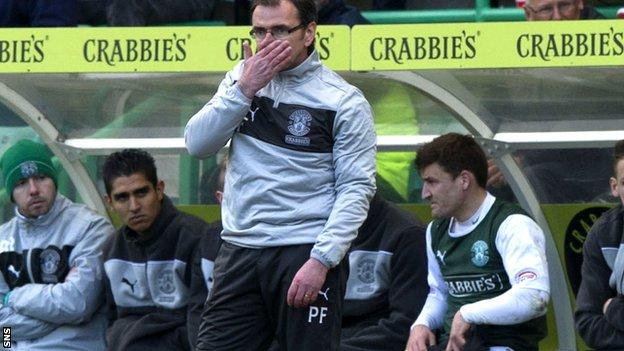 Hibernian manager Pat Fenlon refused to rule out reaching the top half of the Scottish Premier League, despite

The Easter Road club need to win at Celtic Park next week to keep their top-six chances alive, but Fenlon insists it's not an unrealistic goal.

"We've got to prepare for Celtic first," said Fenlon.

"We need to win the game to give ourselves a chance and that's a difficult task, but not impossible."

Ross Draper lobbed Hibs keeper Ben Williams for the opener, which was cancelled out by a Leigh Griffiths deflection.

However, Andrew Shinnie's 65th-minute shot evaded the Hibs defence to seal the points for the Highlanders and Fenlon rued his side's fortune in the match.

"I thought we were unlucky," he said.

"Nobody picked up Shinnie and it took a deflection as we tried to close it down."

Despite the defeat, Fenlon insists his players gave a good account of themselves and just need to work harder at not conceding sloppy goals.

"We're disappointed with the goals we gave away, but not with how we played or the work-rate and the attitude of the players," added the manager.

"We just didn't make them work too hard for the goals, which is disappointing."