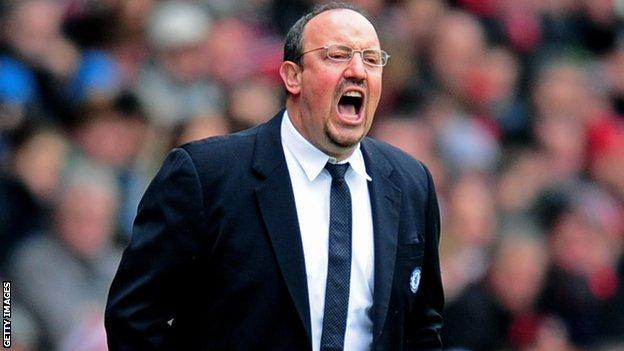 Rafael Benitez defended his decision to make seven changes as Chelsea were beaten 2-1 at Southampton ahead of Monday's FA Cup quarter-final replay against Manchester United.

Defenders David Luiz and Ashley Cole, as well as midfielder Eden Hazard, were among those left out as Chelsea dropped from third to fourth in the table.

The games that could define Chelsea's season

"We had to manage the squad," said Blues' interim boss Benitez.

"We didn't have many options in some positions, we had the players we had."

Gary Cahill was unavailable for the match against Southampton because of a knee injury while Juan Mata was ill.

Benitez said: "You have to approach every game like it is the most important and we thought with these players we would be fine.

"I think that you could see that in the first half we didn't have the intensity we were expecting.

"We improved in the second half, made more chances, but still we didn't make the right decisions in the final third.

"But at least we were there and made the chances."

Despite this being Chelsea's third straight away defeat in the Premier League, which saw them leapfrogged in the table by Tottenham, the Spaniard insisted his side were still well-placed to qualify for the Champions League.

"We still have one game in hand [on Tottenham] and we have to carry on and concentrate and move on and start thinking about [the FA Cup on] Monday," Benitez said.

"In the league you still have a lot of games and I think [the battle for a top-four finish] will run for the rest of the season."