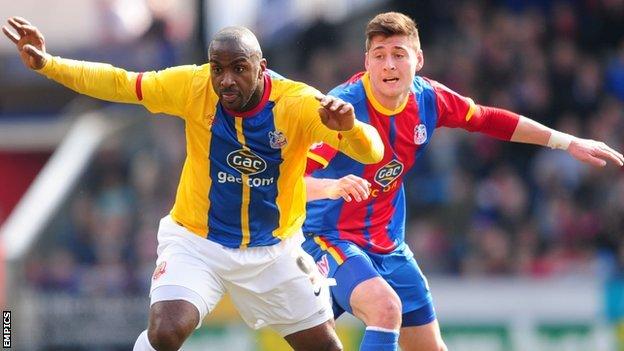 Ian Holloway's Crystal Palace were held at home by Barnsley, who moved a point clear of the relegation zone.

Referee Kevin Stroud ruled that both Barnsley's home and away strips clashed with Palace's red and blue kit, so they had to wear the Eagles' away shirts.

Palace had the better of the chances but Glenn Murray saw a first-half clipped effort saved by Luke Steele.

Substitute Aaron Wilbraham headed wide late on for the promotion-chasing hosts who have not scored in four games.

After their first goalless draw of the season, Barnsley are now on 48 points, the total they reached last season, when they finished fourth from bottom

Although they remain in the play-offs, a run of five games without a win has left them eight points adrift of the automatic promotion places with five games remaining.

Jason Scotland tried his luck with two long-range shots early on for David Flitcroft's relegation-threatened Tykes, wearing Palace's yellow and blue away shirts, who came into the game on the back of three wins from their last four.

But Palace gained control of the game soon after, with Steele denying Andre Moritz's free-kick before saving from Murray, the Championship's leading scorer.

Wilbraham came on with 10 minutes remaining but failed to hit the target with three chances late on as the point kept Barnsley out of the bottom three.

"The more we get a point and not three the worse it will be, all we have to do is try and get some rhythm back to us and start scoring goals again.

"We have to take it in small steps, we have definitely stayed up, then you have to try and get enough to get in the play-offs, then that first or second spot after that.

"What we have to do is get on a better run than this, the people that time those runs are normally successful."

"I think the experience of Stephen Foster and Bobby Hassell marshalled Glenn Murray really well which you have to do, he is the best striker in the league.

"Having two experienced heads in there helped us and it is important down the centre of pitch that you have leaders.

"The lads have stuck to their task to a man."