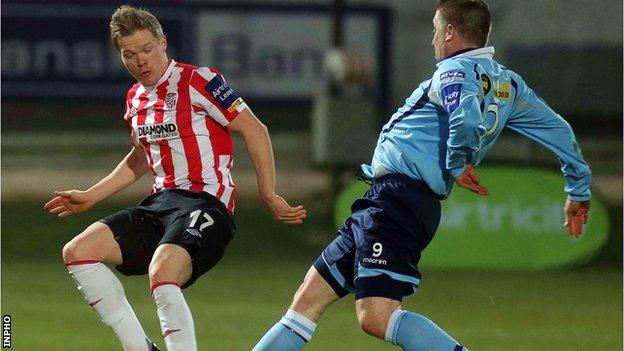 Derry City secured their first home win of the season in the Premier Division with a comfortable 4-0 victory over Shelbourne on Friday at the Brandywell.

Rory Patterson opened the scoring after 33 minutes and the Candystripes doubled their lead on 63 minutes with an own goal from Shelbourne's Paul Crowley.

Derry only took one point from six in their opening two home league games but went into Friday night's game on the back of a morale-boosting away win at Cork last week.

Rafter forced a great save from Shelbourne goalkeeper Niall Burdon in the fourth minute but the visitors were unlucky not to be awarded a penalty in the 22nd minute when a cross into the box appeared to strike Shane McEleney on the hand. 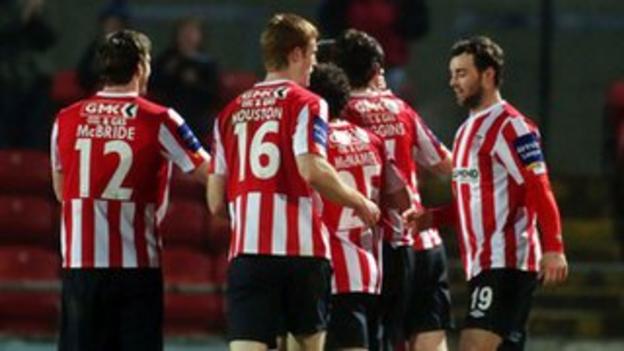 Clever work by Barry McNamee gave Patterson a sight of goal and he curled the ball brilliantly around Burdon for Derry's opener in the first half.

The home side had a number of half chances early in the second half, the impressive Sean Houston going close on a few occasions.

Shelbourne should have scored an equalizer after 59 minutes but Paul Crowley's free header fell straight to Gerard Doherty in the Derry goals.

Four minutes later, Derry made it 2-0 through an own goal.

Shelbourne midfielder Crowley was in the thick of the action again - this time directing Patteron's low cross into his own net.

Derry were in the ascendancy in the last quarter and stretched their lead further when Rafter's pile-driver from the edge of the area flew into the roof of the net after 89 minutes.

Declan Devine's team added a fourth in the second minute of stoppage time from the penalty spot.

Simon Madden was chopped down by Shels' defender Jack Memery and despite scuffing his shot, substitute Mark Griffin converted the spot kick for an emphatic win.