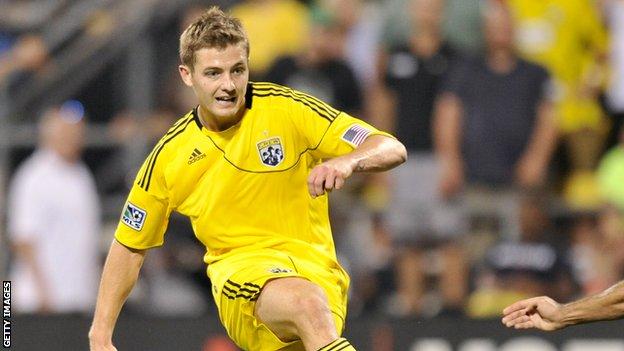 Rogers, 25, recently said he was "stepping away" from football after announcing he was gay, becoming just the third footballer to do so.

"In football it's obviously impossible to come out," Rogers told The Guardian.

"Imagine going to training every day and being in that spotlight? It's been a bit of a circus anyway."

He added: "But that would have been crazy."

The California-born player won 18 caps for United States and was released by Leeds in January.

In February, he revealed he was gay in a message posted on his personal website.

He admitted the reaction of his team-mates was an issue he had to contend with when deciding whether to come out while still playing football.

Rogers on the future for gay footballers

"I know things will change. There will be gay footballers. I just don't know when and how long it will take.

"The next step is how do you create an atmosphere where men and women feel it's OK to come out and continue to play? It's a great question.

"Football has so much history. It's a great sport with so much culture and tradition. But I'm positive there will be changes."

Extract taken from The Guardian's interview with Robbie Rogers

"I was very fearful how my team-mates were going to react. Was it going to change them?

"Even though I'd still be the same person would it change the way they acted towards me - when we were in the dressing room or the bus?"

Rogers, who also played for Dutch side Heerenveen, Columbus Crew and Stevenage on loan, said football was an amazing, but brutal sport, but one that "picks people up and slams them on their heads".

Rogers said he was unsure if he could have become a role-model who could stand up to the likely abuse he would receive for being openly gay.

"I might be strong enough but I don't know if that's really what I want. I'd just want to be a footballer.

"I wouldn't want to deal with the circus. Are people coming to see you because you're gay?"

The American also admitted he was concerned by the reaction of opposition fans and the media.

"If you're playing well it will be reported as: 'The gay footballer is playing well.' And if you have a bad game it'll be: 'Aw, that gay dude, he's struggling because he's gay.'"

Only two other footballers have publicly said they were gay.

In 1990, former England Under-21 international Justin Fashanu was the first professional footballer in Britain to reveal he was gay. He took his own life eight years later, aged 37.