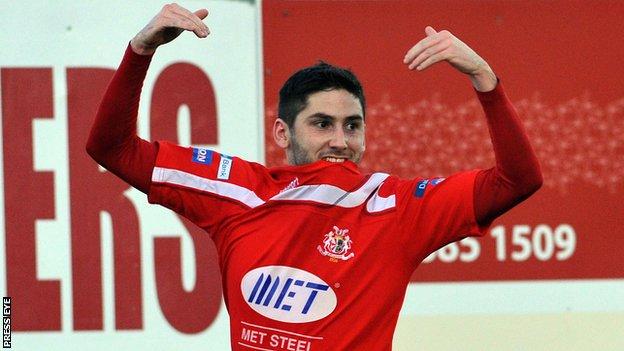 Portadown's bid to secure a top-six spot in the Premiership split has been hit by the suspension of Sean Mackle for Saturday's game at Distillery.

The Ports are seventh and three points behind Ballinamallard, who also hold a superior goal difference of seven.

The Mallards take on reigning champions Linfield at Ferney Park.

Cliftonville are closing in on the title and Tommy Breslin's men sit 11 points clear at the top going into their Solitude match with Ballymena.

Ballinamallard v Linfield is the main commentary game with Grant Cameron and Scott Young taking you through the action.

There is selected commentary from Solitude as Cliftonville continue their title push against Ballymena.

There will also be reports from the day's other four games.

Second-placed Crusaders will be without banned midfielder Chris Morrow for the game against Glentoran at the Oval.

The Crues are eight points ahead of Linfield in third and the priority has switched from catching Cliftonville to securing the runners-up spot.

"I'm delighted with the position we are in going into the final part of the season," said Seaview boss Stephen Baxter.

"We've been very good all season - we haven't lost many games but Cliftonville have lost fewer and that is why they are top.

"Both teams have been very consistent and have won all over the country.

"I've said second spot was our realistic target and we just have to keep our heads down and work towards that.

"It's not achieved yet and there are some big games still to play."

The outcome at the top seems settled but the battle at the bottom continues with just two points separating basement boys Distillery and Donegal Celtic.

Donegal Celtic midfielder Ciaran Carson is suspended for the meeting with Dungannon Swifts at Stangmore Park.