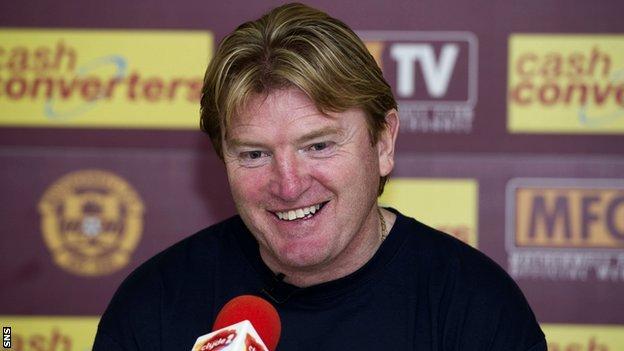 Manager Stuart McCall set his sights on holding on to second place in the Premier League after signing a new two-year deal at Motherwell.

McCall joined Motherwell in the final days of 2010 and had opened contract talks before Christmas.

"There has never been any doubt in my mind but I am pleased it is finally signed," said the 48-year-old.

"We can now focus all the attention on the last seven matches of this SPL season."

The former Scotland and Everton midfielder led the Lanarkshire club to a top six finish and the Scottish Cup final in his first season.

His first full campaign saw Motherwell finish third in the league and secure a place in the Champions League qualifiers and they now sit second in the table, three points ahead of Inverness CT.

Fir Park chief executive Leeann Dempster added: "We are really delighted to have Stuart at the club for a further two years.

"We have enjoyed real success under his stewardship with a strong backroom staff and playing squad and we hope that we can build on that for the season ahead."