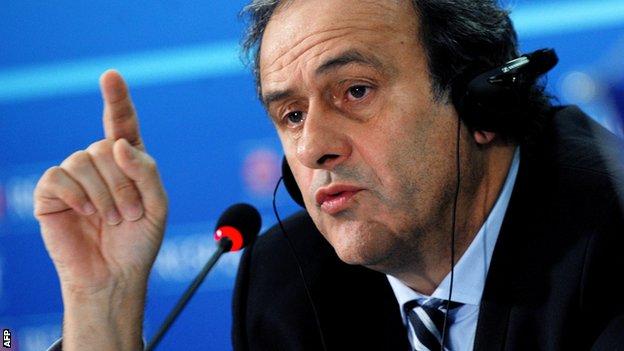 Uefa president Michel Platini says goal-line technology is too expensive for use in the Champions League.

Platini, 57, said he would rather the money was spent on youth football.

"I prefer to put more money into youth football and infrastructure than spend it on technology when there's a goal in a blue moon that hasn't been seen by a referee," he said.

Platini added that he was happy with the five-man referee system, used in the Champions League and Europa League.

Fifa is set to use goal-line technology at the 2014 World Cup in Brazil.

Platini said the technology would need to be installed in 280 stadiums for European football, which the former France international sees as unnecessary.

"It would cost around 54 million euros (£46m) over five years for this technology, so it's quite expensive for the sort of mistake which happens once every 40 years," he said.

"In the Champions League, I'm very happy with the results (of a five-man team). Practically no mistakes have been made and the referees see practically everything that happens on the pitch."