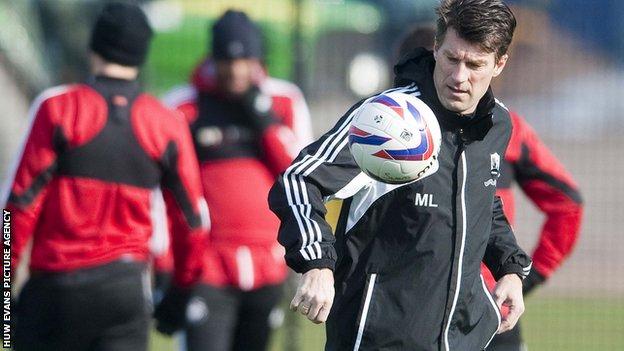 Spurs had 12 players on international duty during the last two weeks, while City have five players returning from back-to-back 2014 World Cup qualifiers.

"In Spain they call it the Fifa virus," said former Barcelona player Laudrup.

"The big teams suffer, especially the first game after the break because they haven't been together for two weeks."

However, Laudrup does not believe Swansea, who are ninth in the Premier League and won the League Cup this season, will be badly affected by the disruption of international football when they take on Spurs at the Liberty Stadium.

"We have had players away but it's not like 15 players, like some of the big clubs," the former Denmark playmaker, who won 104 caps for his country between 1982 and 1998, continued.

"But for Tottenham, it's not the same because they have more international players than we have.

"You never know after an international break. Some of the big clubs, they always hate it.

"Everybody is away and some of the players come back on the Thursday or the Friday and have to travel on a Friday and play on a Saturday."

Spurs, who are fourth in the Premier League on 54 points and are in a Champions League qualifying spot for next season, are 14 points ahead of Swansea.