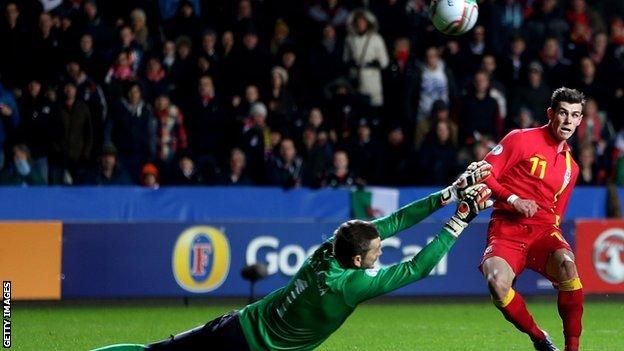 Swansea City midfielder Nathan Dyer says he has been amazed by how good a player Gareth Bale has become.

Dyer used to train at youth level with the Wales star when they were both with Southampton.

"I do remember him having the same technique as he has, but I think the pace and the power has blown even me," said Dyer.

"He has blown everyone out of the water with what he can do now. He is the total footballer."

He has blown everyone out of the water with what he can do now. He is the total footballer

Bale is due to make his second appearance at the Liberty Stadium in the space of five days after he was part of the Wales team which lost 2-1 in Tuesday's World Cup qualifier.

But though 23-year-old Bale will be the headline act on Saturday, Dyer, 25, has warned Swansea they must not concentrate solely on the Welshman.

"I think if you concentrate on what [Bale is] doing most of the time you don't see the runs from other players," said Dyer.

"They have got dangerous players in the whole of their squad. Obviously Gareth is the main man at the moment, but they have players who can score goals from anywhere on the pitch.

"We can't focus everything on Gareth - obviously you have to try to stop him somehow - but you have to make sure everyone else is taken care of as well."

When the two sides met at White Hart Lane in December, Spurs emerged 1-0 winners and are now vying for a Champions League spot.

"They are a great side. They have power and pace in the side," Dyer added.

"But it's not about stopping them - it's playing our own game."