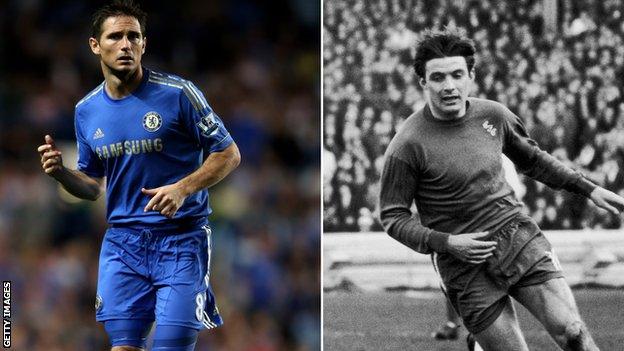 Frank Lampard has been backed to break the Chelsea goalscoring record by Bobby Tambling - the former striker who has held it since he left the club in 1970.

Chelsea have at least 12 games left this season with Lampard's future at the club beyond this campaign in doubt.

"We chatted about the goals. He has always been very supportive of me in terms of the record," said Lampard.

"He is an absolutely great man. We just chatted about Chelsea and the team and how well he is and he said hello to the family."

With Chelsea facing up to an FA Cup quarter-final replay on Monday against Manchester United and a Europa League last-eight meeting with Rubin Kazan, the Blues could progress further in both competitions.

If they were to reach the final of both, then Lampard, who joined Chelsea in 2001 from West Ham, could have an extra five games to break Tambling's record.

However, that is dependant on how many times Chelsea's interim manager Rafael Benitez selects the England international to play in the club's remaining games.

Lampard's contract is due to expire at the end of the season and the club have yet to begin talks over a new deal.

"The record is within touching distance and I keep getting reminded and try not to think about it too much," Lampard told BBC Radio 5 live.

"If I can keep my head down, stay fit and keep playing my games then hopefully I will get there. Simple as that."

Benitez has no problems with a busy fixture schedule that includes five games in a 13-day period, saying he's happy to be chasing trophies and a top four place in the Premier League.

Chelsea start a hectic fortnight when they take on Southampton away in the league on Saturday before facing United at Stamford Bridge in an FA Cup quarter-final replay.

They then tackle the first leg of their Europa League quarter-final against Rubin Kazan on Thursday, with the second leg to follow in Russia on 11 April after a league game at home with Sunderland.

"With a top side, the last month in the season is when you fight for trophies. We are still there and it is a positive."