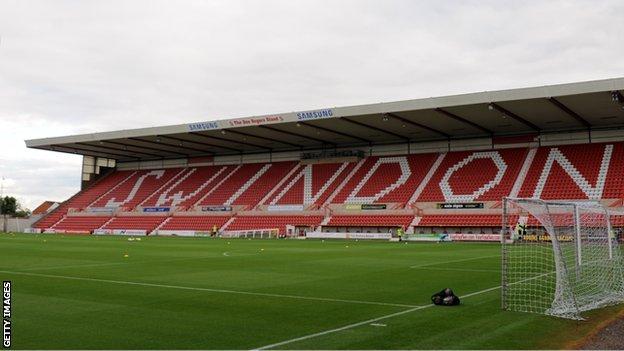 Swindon Town have confirmed that their transfer embargo has been lifted.

The Football League imposed the sanction ahead of the takeover of the League One club by a consortium led by chairman Jed McCrory.

Historical debt inherited by the new board has now been paid and the embargo was lifted minutes before Thursday's loan window closed at 17:00 GMT.

It meant Town were able to complete the loan signings of Tottenham trio Nathan Byrne, Massimo Luongo and Dean Parrett.

Signed professional deal with Spurs in 2010. Has previously had loan spells with Brentford, Crawley and Bournemouth.

Has been a Tottenham player since 2008, making his debut in Uefa Cup against Shakhtar. Previous loans at Yeovil, Charlton, Plymouth and Aldershot.

Australian-born Luongo has made one appearance for Spurs in the Carling Cup. Spent three months on loan at Ipswich this season.

Defender Byrne, Australian Luongo and fellow midfielder Parrett have all joined until the end of the season and are the first signings by new boss Kevin MacDonald.

The club had overspent on wages and fees after being forced to pay a combined tribunal fee in excess of £500,000 for the signing of Troy Archibald-Henville from Exeter and James Collins from Shrewsbury.

The embargo was lifted a month later, but in January, owner Andrew Black announced he had put Town up for sale as he was no longer willing to fund the club.

McCrory's consortium agreed a deal to take over the Robins on 30 January, but because the necessary checks had not been approved, the club were unable to complete the signings of Marlon Pack from Cheltenham, and Charlton duo Danny Green and Bradley Wright-Phillips before the transfer window shut.

The club were then forced to sell star winger Matt Ritchie to Bournemouth to raise funds, which led to Di Canio quitting his position on 18 February.

The takeover of Swindon was completed three days later but his replacement, MacDonald, had been unable to add to his squad until now.