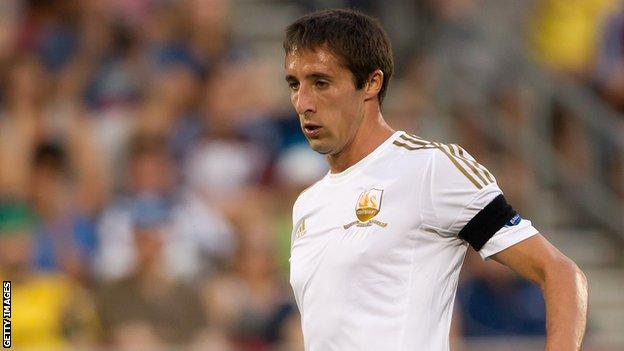 Oldham Athletic have signed Federico Bessone, who was a free agent after being released by Swindon in December.

The Argentina-born left-back, 29, had been training with La Liga side Espanyol

"We need the cover because Jonathan Grounds is on eight bookings.

"If he goes down, we might struggle in that area. We had a look at a couple who weren't quite fit enough, but this guy has got good pedigree," manager Lee Johnson told BBC Radio Manchester.

"I know people that have seen him recently, although I haven't seen him myself, but in this instance it was a no-brainer for the club.

"They've gone to great time and expense to get him over here, which is good because it shows they believe he's fit and ready, and they believe he can earn himself a contract."

Bessone, who has agreed a contract to the end of the season, is the second new arrival at Boundary Park this week, following the arrival of

"I have kept myself fit and now want to show everyone here what I can do," he told the club website.

"I have never been in this situation before [being without a club] and it has been very frustrating. I have always played at a high level, but now my career is back on track."