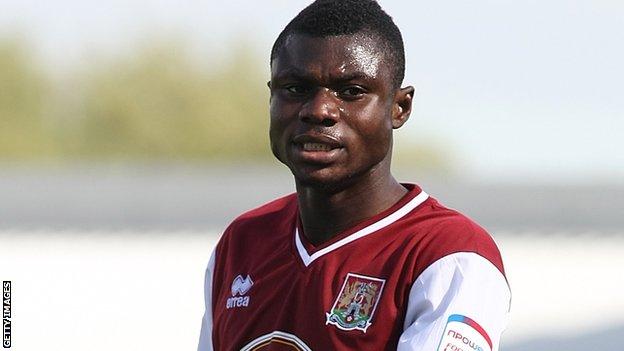 Northampton Town's Seth Nana-Twumasi will not be offered a new contract, manager Aidy Boothroyd has confirmed.

The 22-year-old defender has not played for the Cobblers since rupturing his cruciate knee ligament in a match in September 2011.

Boothroyd told BBC Radio Northampton: "I've already spoken to Nana and we'll not be offering him a contract.

"We're a different club now to the one he joined. If we can, we can help him to find himself a club."

Nana made 16 appearances for the Cobblers and looked a decent player with a good cross on him.

It's desperately unfortunate for him that his recovery has taken so long, but Aidy Boothroyd has to be pragmatic about a player who never had a chance to make a big impression in matches.

Boothroyd added: "He's always got a smile on his face, he works extremely hard but there'll be nothing here for him next year."

Meanwhile, Boothroyd said the signing of Nathan Cameron means he will not be recalling David Artell from his loan at Wrexham.

"I've thought long and hard about whether I bring David back but I think the best place for him is where he is - playing games in a run-in and then I'll assess that situation at the end of the season," stated the manager.

"Nathan is local, he's very talented, he'll fight for his spot and I genuinely think we've got a very good addition to the squad."

Boothroyd also confirmed that defender Kelvin Langmead's recent knee surgery is set to rule him out until the "back end of April".