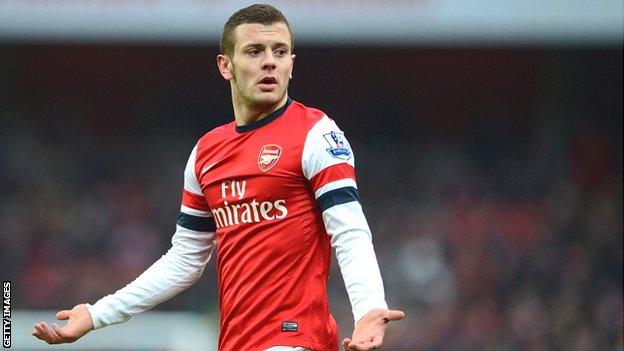 The 21-year-old has not played since suffering the problem in on 3 March.

Midfielder Wilshere is set to miss games against Reading and West Brom but should return for Norwich on 13 April.

"We deferred his rehab and gave him one more week," said Wenger. "I believe [he will return] in two weeks. That means not [West Brom], the game after."

Wilshere missed the whole of last season with an injury to his right ankle, but his latest issue affects his other ankle.

Wenger initially estimated he would be out for three weeks, but his absence is now likely to extend to four.

"It is not better, not worse," said the Frenchman. "Because it was an inflammation of the bone and we had such history with him, we are a bit more cautious than you would be with you or with me.

"We'll rest him when it's needed. He has regular scans and as soon as we have an alert we will respect it no matter what is at stake.

"He had a difficult moment, of course, when you told him because he didn't feel any special pain - but he knows he has to take care of his future. Because he is a very young player, I think he accepts it."

Wenger will also be without Theo Walcott for Saturday's visit of Reading after the forward suffered a on international duty.

There are also doubts over left-back Kieran Gibbs (illness) and midfielder Abou Diaby, who has an unspecified problem.

But forward Lukas Podolski and right-back Bacary Sagna are fit.

Arsenal currently sit four points behind fourth-place Tottenham with a game in hand and come into the match off the back of successive 2-0 victories at Bayern Munich and Swansea.

The Bayern win could not prevent them being knocked out of the Champions League, 3-2 on aggregate, but beating Swansea in the Premier League boosted their hopes of a top-four finish.

"We just want to continue our form," said Wenger, whose team have qualified for the Champions League every season since he arrived in 1996. "Bayern and Swansea are a good inspiration."

"It's sad to see Brian go but we will be on our toes," said Wenger. "We know we play a team who fight not to go down and we fight to be in the top four. It's just important we focus on what we want to do."