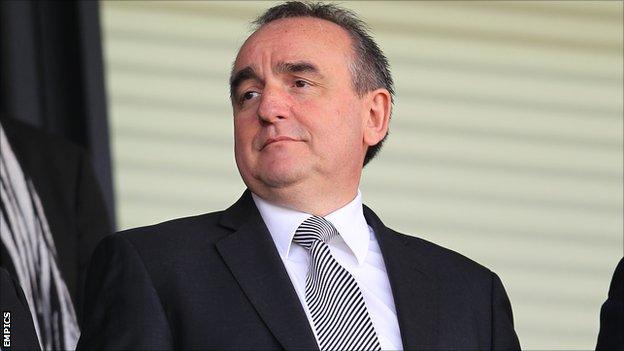 Managing director Derek Llambias has said the strength of Newcastle United's financial position will allow them to further add to the squad this summer.

with turnover of £93.3m restoring their place in the top 20 of the world's biggest revenue-generating clubs.

"There will be a spend in the summer," Llambias told BBC Newcastle.

"There are areas we need to work on, certain players will leave and will be replaced and there is trading."

Llambias added: "The only reason we dropped out [of the top 20 clubs] is because of our relegation [to the Championship in 2008-09]. We're back in there and hopefully we can go further up the level.

However TV revenue and the boost of a four-year sponsorship deal with Wonga which will kick in this summer will put Newcastle will add to the club's spending power and Llambias is confident of reporting further growth next year.

"It's a massive achievement [to be making a profit], the Andy Carroll money has been spent on the field and it's been great value for the club and the fans," he added.

"Year on year turnover will go up because of the new financial benefits of TV money and we've done two tremendous commercial deals.

"We'll have a profit again [next season], in January we had a net £31m spend, but we should still be in profit next year.

"Accountancy should be boring and this is boring, the excitement should be on the pitch."