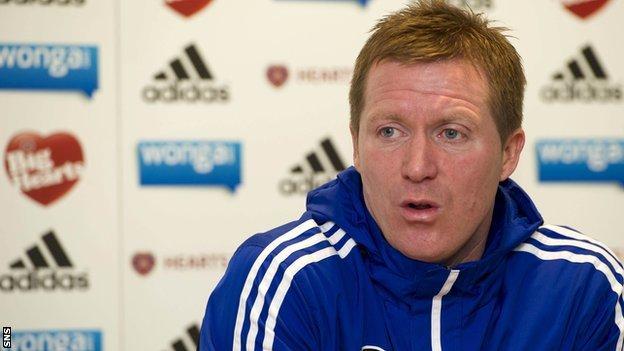 Hearts manager Gary Locke has insisted there is plenty for his side to play for until the end of the season.

Hearts cannot finish in the top six of the Scottish Premier League and lost the League Cup final to St Mirren.

"We have seven big league games left and it is up to me and the back room staff, along with the players, to win as many of those as possible." he said.

"We realise it's been a disappointing season and where we are in the league is not where we want to be."

Hearts have been plagued with financial issues for some time and Locke says getting to the end of the season is still the target for all involved at Tynecastle.

"The club are still not out of the woods yet," he said.

"It has been a battle all season but everyone associated with the club, the players, the back room staff, the fans and the people who work for the club have all done a great job under very difficult circumstances.

"Hopefully all will be resolved in the summer and we can have a better season next year."

Locke also asserted that the squad at the club next year will be trimmed both in terms of numbers and finances.

"We have a lot of players out of contract, and those still here will be on a more meaningful wage," he said.

"We will not have any players on huge money as we have suffered from that this season.

"We are trying to make decisions now. We are starting to rebuild now and we are working behind the scenes on next season."