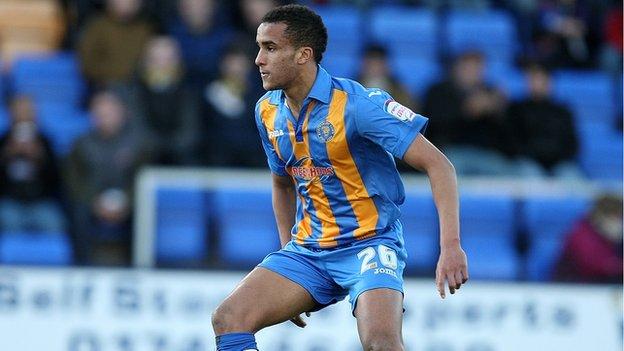 Shrewsbury have re-signed West Brom full-back James Hurst and brought in Birmingham striker Akwasi Asante on loan until the end of the season.

Hurst, 21, who had a loan spell last term at the Meadow, comes in as cover for injured loan men Cameron Gayle (hamstring) and Rob Edwards (thigh).

Jermaine Grandison may be fit to return for Saturday's trip to Carlisle.

Hurst is joined at Shrewsbury by 20-year-old Asante, who had a short loan spell at Northampton last season.

The Dutch-born forward, who moved to England at the age of 13, made his Blues debut in the Europa League against Portuguese club CD Nacional last season.

Hurst confirmed on his Twitter account that he will make the move back to the Meadow, saying that he is "delighted to have signed on loan at Shrewsbury until the end of the season".

Sutton Coldfield-born Hurst, 21, has made just three first team appearances for Albion, all of them away from home.

After making seven appearances for Shrewsbury last season, he returned to Albion before going out on loan again at Chesterfield in January. He then spent a month this season in the Championship at the Baggies' neighbours Birmingham City.

He also counts short loan spells at Portsmouth and Blackpool in his tally of 30 career appearances.

"James had a decent spell with us last season," said Town manager Turner.

"He went off and played in the first division for Chesterfield and also played for them at Wembley in the Johnstone's Paint Trophy final.

"We felt we needed some extra cover at the back with the injuries to Cameron Gayle, Rob Edwards and Jermaine Grandison."