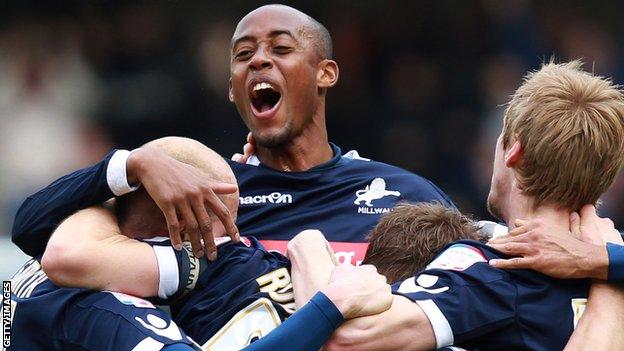 Nadjim Abdou might play for the 15th worst footballing nation in the world, but on Saturday he will be at the centre of attention as he tries to help Millwall book a place in the FA Cup final for the second time in nine years.

Approximately 5,000 miles away, football fans on the archipelago Indian Ocean island nation of Comoros will crowd around television sets hoping the captain of their national team can inspire the Championship underdogs to victory over Wigan Athletic.

There are 207 nations in Fifa's rankings table. Comoros, nestled between Madagascar and Mozambique, are 192nd on that list, slightly above European featherweights Andorra and San Marino, but trailing Sri Lanka and the Bahamas.

The national stadium in Mitsamiouli has a capacity of 5,000, the squad is made up mainly of semi-professional players, while Comoros's World Cup 2014 qualifying campaign ended before it had really begun thanks to a 5-1 aggregate defeat by Mozambique in November 2011.

In football terms, it is a world away from the glitz and glamour of an FA Cup semi-final at Wembley Stadium. But Abdou knows there will be a significant pocket of Comoros's population rooting for Millwall, 16th in the Championship table, against Premier League Wigan.

"Comoros might not get big crowds watching them, but the people still love their football," said the midfielder, who was born in the French town of Martigues, near Marseille, but whose father, Anlyny, and mother, Moina, are both from Comoros.

"There is a lot of French football shown on the television over there, as well as the Premier League.

"Whenever I go back I get asked 'when are you going to be on television?'. Well, now hopefully they'll be able to watch me - if I play."

Abdou left Plymouth, then a Championship club, for Millwall, then in League One, in the summer of 2008 and is looking forward to his third Wembley trip in five years, after back-to-back play-off finals in 2009 and 2010.

The 28-year-old's tireless displays in central midfield have seen "Jimmy" taken to the hearts of Millwall's fans.

Since being named the Lions' player of the year last season, he has captained the club, leading the side out in January as Kenny Jackett's side took their first steps on the road to the FA Cup semi-finals with a third-round win over Preston North End.

Leeds player El-Hadji Diouf and Bolton striker Marvin Sordell have both complained of racist abuse while playing at Millwall this season.

Yet Abdou, a Muslim, says he has yet to encounter any problems in his five years there.

Indeed, his "very positive" relationship with Millwall's supporters has helped him stay strong amid the backdrop of a worrying ongoing family situation.

While Abdou will be cheered on by many of his family and friends at Wembley, his three-year-old son Ilyas will remain in Marseille, where he is receiving treatment for leukaemia.

It has been a difficult few months for the player being away from his son, who was diagnosed with the disease before Christmas.

But the combined support of his team-mates, the club and fans has helped him cope.

"My son is doing well," Abdou added. "The gaffer gives me the chance to go back to Marseille whenever I want. I want to pay him back for that because I don't want to cause too much disruption to the team.

"I really appreciate the fact that the fans are behind me because, to be honest, I need them."

Having played an important role in Millwall's 2010 League One play-off win over Swindon - 12 months after the club were denied promotion by Scunthorpe at Wembley - Abdou is now focused on helping the Lions repeat their feat of 2004, when they reached the FA Cup final before losing to Manchester United.

He has appeared in four of the club's five FA Cup ties this season, including the 2-1 win over Aston Villa on 25 January, and scored his first goal of the season on Tuesday in a 2-1 home defeat by Sheffield Wednesday which left Millwall five points above the relegation zone.

"People still talk about that day against United nine years ago at Wembley," Abdou added.

"I've got to be honest, I don't have any memories of it because I was 20 at the time and in France playing for Sedan.

"We've been poor in the league lately but somehow we've been able to find some momentum in the cup.

"Can we beat Wigan?

"It's a semi-final at Wembley so you have to have some hope. This is a chance to get to the final and we're going to Wembley to win."