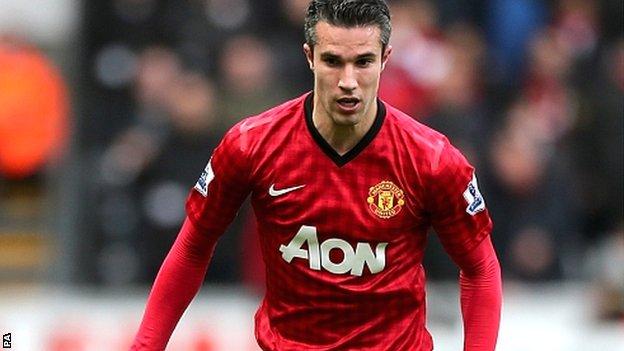 Manchester United striker Robin van Persie says he may stay at Old Trafford for the remainder of his career.

He is second in the Premier League scoring charts behind Luis Suarez but his 19 goals have helped United to a 15-point lead with eight games to play.

"For the next few years I will be at Man United - maybe longer," Van Persie said. "United could be my last club."

Van Persie scored 37 goals in his final season with Arsenal and the extra firepower he has provided to United's frontline is seen by many observers as a significant factor behind their commanding league position.

He has revelled in a United squad featuring 39-year-old Ryan Giggs and another player who has spent his entire senior career at Old Trafford, 38-year-old Paul Scholes.

"You have a number of clubs in Europe where older players can find it good, where they are valued," Van Persie said.

"You used to have that at Juventus and AC Milan, Manchester United today is a good example. So who knows how long I will stay at the club.

"There is a new challenge for me every day at United. My development is an ongoing process.

"That gets an extra boost when you are surrounded by new coaches and team-mates, all with their own ideas, in a totally new environment."

The Dutchman paid tribute to United manager Sir Alex Ferguson, who has been at the Old Trafford helm since November 1986.

"He is one of the friendliest people I have ever come across in my life," Van Persie said of the 71-year-old Glaswegian

"Of course Ferguson has another side, when he is in the game mode. Then he is a warrior just like us, the players on the field.

[Holland manager] "Louis Van Gaal is the same. People base their opinions on what they see on TV of him. That is 20% of the reality. I get it, it is human to judge that way, but for good judgment you need more information."

Van Persie's goalscoring form has dipped in recent weeks for United, with only one goal in 10 matches, but he scored twice for the Netherlands against Romania on Tuesday.

It took his international tally to 34 from 74 appearances, eclipsing Johan Cruyff and Abe Lenstra to become the fifth highest scorer in Dutch history, six behind Patrick Kluivert's national record.