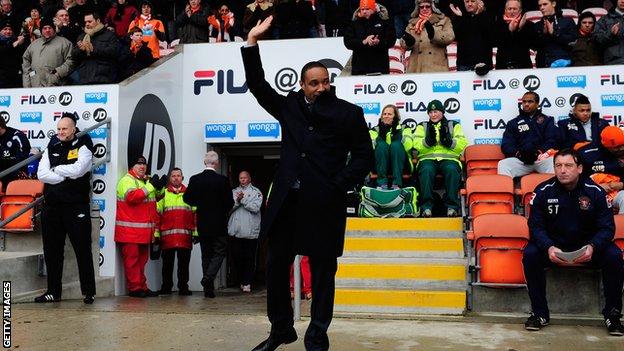 Paul Ince fears the next generation of prospective British bosses will be put off a career in management after seeing 34 dismissed so far this season.

Blackpool boss Ince has called for the introduction of a window for clubs to make a change of manager if they wish.

Pool face Blackburn, who after 67 days, on Friday.

Ince told BBC Radio Lancashire: "Why would the Steven Gerrards and the Jamie Carraghers want to go into management when there's no protection for them?"

We've got St George's Park and this great training facility, which are all about bringing young English coaches through, but where's the protection for them if they're getting sacked after 67 days?

Richard Bevan, the chief executive of the League Managers' Association,

And Ince, who was dismissed after just 177 days as Blackburn boss in 2008, believes the current turmoil at Ewood Park has strengthened the case for a "managerial window", similar to the transfer window that is currently in place for players.

"There needs to be some legislation where there's protection for managers," added the former England captain. "It needs to work both ways - not just for managers to get sacked, but for managers who want to leave.

"You look at Michael Appleton - he's a young English manager coming into the game. To lose your job after 67 days is ridiculous. We're not getting any time.

"We've got St George's Park and this great training facility, which are all about bringing young English coaches through, but where's the protection for them if they're getting sacked after 67 days?

"That's what disappoints me with the Blackburn situation. It's OK that we can protect players because they're on contracts. We can sell them in January, and if they don't want to go, they stay.

"It should be exactly the same as a manager. It stops all the commotion and it makes sense. Someone needs to seriously look at it."