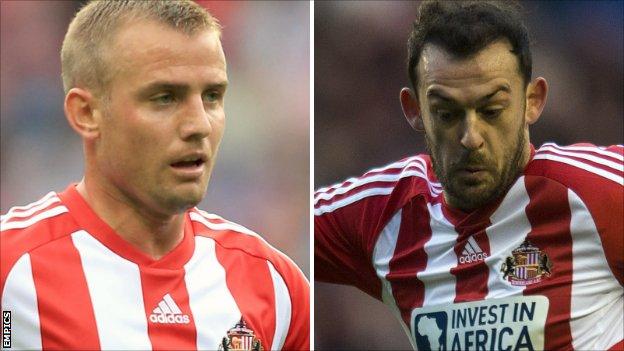 Sunderland will be without striker Steven Fletcher and midfielder Lee Cattermole for the remainder of the season, the club has confirmed.

Fletcher, 26, damaged ankle ligaments on international duty with Scotland, leaving the field on a stretcher in last week's 2-1 defeat by Wales.

It is not known if 11-goal top scorer Fletcher requires an operation.

The loss of two key players is a blow for manager Martin O'Neill, whose side lie 15th in the Premier League, just four points clear of the relegation zone.

Fletcher's 11 league goals have so far accounted for a third of their total for the season, and the Black Cats have only lost one of the nine games he has scored in during 2012-13

Craig Gardner, with six goals, is his nearest challenger in the Sunderland squad, while Stephane Sessegnon has scored five

Fletcher has scored one third of the Black Cats' league tally this season, but has scored in just two of their last 12 games.

Cattermole, meanwhile, has been limited to only 14 appearances through injury this season, but as skipper has remained an influential member of the squad.

"We've just had the news through from the specialist," O'Neill told BBC Newcastle.

"His ankle will have to be put in a non-weight bearing plaster, or something like that, for about a fortnight to know whether it might have settled down or will need an operation.

O'Neill is likely to turn to as cover for Fletcher, with the former Swansea player awaiting his first goal in Sunderland colours.

Connor Wickham could also step up, having returned from a loan spell at Sheffield Wednesday to feature in the 1-1 draw at Norwich earlier this month.

Fletcher's absence will also come as a disappointment for Scotland manager Gordon Strachan.

Strachan called the former Wolves, Burnley and Hibernian player into his squad for the recent international period, and has a further World Cup qualifier against Croatia in June that the striker may miss.