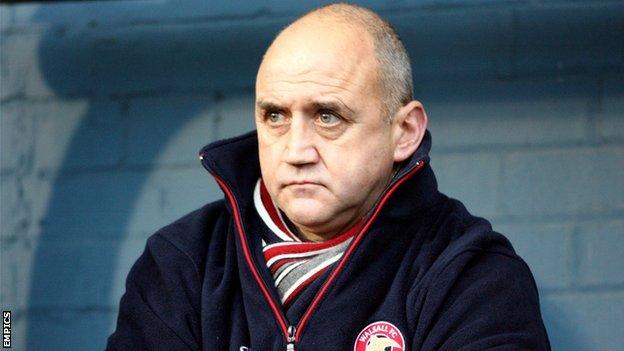 Cambridge United head coach Richard Money said there are no excuses for mistakes being made by his players.

United lost 2-1 on a difficult pitch at Hyde on Tuesday evening, and Money said the performance typified their season.

Money told BBC Cambridgeshire: "We came out on the wrong side in a game in which we did enough to win.

The pitch is difficult, but they're flipping professional footballers, they're supposed to have the flipping technique to be able to deal with it

"There were too many mis-kicks, too many unforced errors in key positions on the pitch and unfortunately it's become a habit."

The result left Cambridge 11th in the Blue Square Bet Premier table and effectively extinguished any hopes of a late run for a play-off position.

"I thought it was a really good game on a very tough surface and at times in a bit of a snow storm, in which both teams really went at it," continued Money.

"But it was also a game in which you never felt comfortable that we weren't going to concede, and in a way it's been the story of our season.

"You can make excuses that the ball is bobbling and the pitch is difficult, but they're flipping professional footballers, they're supposed to have the flipping technique to be able to deal with it, and at times under a bit of pressure we can't.

"It was a difficult surface to make four, five, six passes on, but there was a lot of good play from us, and if we take our chances and defend a little bit more soundly, we come off the pitch winners.

"We have to understand why we came out on the wrong side of the scoreline and do something about it."

Money recently stated he is prepared to make a number of changes to his team ahead of next season.