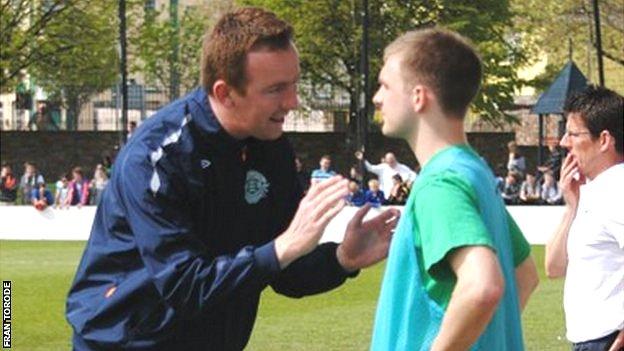 Graham, who will played for eight years in the north of England.

"We can certainly go there and win, but make no mistake about it, they'll be very well prepared," Graham said.

"They've got attacking threats in lots of different areas of the pitch," the ex-island captain told BBC Guernsey.

Graham was born in the north east but was brought up in Guernsey.

He returned to the area to attend university in York and played for a number of sides including Whitby Town, for whom he was an was an unused substitute as they took Plymouth Argyle to a replay in the first round of the FA Cup in 2001, having beaten Spennymoor 3-0 in the preliminary rounds.

He regularly featured against Spennymoor, Blyth Spartans and Bishop's Auckland, and played with current Spennymoor player Michael Laws when the pair were both involved with Northampton Town.

"They're very passionate about their football in the north east," Graham continued.

"Football's almost a religion - there's a real passion for the game and it breeds a slightly different mentality to what you find in the Channel Islands."

And Graham says Tony Vance's side have two choices about how they go about getting the win.

"You can sit back and make sure we don't concede early and get in a position where we can win the game," he said. "If we concede early it's going to be very difficult to come back against a side of their strength.

"Or they could go all out attack because we've got to be confident in the ability there is in the side.

"They'll give it a really good go and whatever happens they'll be fantastic ambassadors for Guernsey."