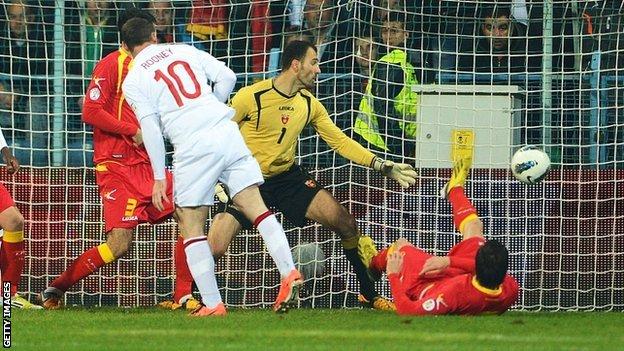 England manager Roy Hodgson insists his side are still in control of their World Cup destiny despite a disappointing draw against Montenegro.

The 1-1 result in Podgorica leaves Montenegro two points clear at the top of qualifying Group H.

"It's still in our hands - we have to play Montenegro at home, Poland at home and Ukraine away," said Hodgson.

"We have three of our four games at home, so we will try to make certain we keep it in our hands by winning those."

Montenegro were a different team in the second half and substitute Dejan Damjanovic's scrambled goal 13 minutes from time earned the home side a deserved point.

Captain Gerrard admitted England paid the price for not finishing off their opponents.

"I think there was a lot of experience out there and I think during the first half we showed that," he said.

"We controlled the game. The problem is at 1-0 you're always vulnerable. You've got to go on and get the second goal to get complete control and we never did that.

"We stopped playing after the break for 20 or 30 minutes and, away from home, you just can't afford to do that.

"We stopped passing the ball, and that's when we lost control, and I think they deserved the equaliser."

It was a similar story to the Euro 2012 qualifier in October 2011 when England, then under Fabio Capello, took a 2-0 lead before conceding two goals with Rooney also being sent off.

That point earned England a place at the European Championship in Poland and Ukraine, but their chances of qualifying for the 2014 World Cup in Brazil remain in the balance.

They have now only beaten San Marino (twice) and Moldova, while drawing with Ukraine, Poland and Montenegro.

Hodgson added: "In the second half we lost our control and Montenegro had a good spell, took the game to us, forced a lot of corners and one resulted in their equaliser.

"My overall feeling is one of disappointment because things looked good for us at half-time.

"But it is not a bad result because Montenegro are a difficult team to beat."

Hodgson, meanwhile, defended his decision to make only one change as England deteriorated desperately in the second half, sending on Ashley Young for Tom Cleverley after Montenegro had equalised.

Given the pressure England were under, I am surprised Roy Hodgson did not make a tactical change or even a substitution earlier in the second half. He only made one change, bringing Ashley Young on for Tom Cleverley, with 12 minutes to go. He needed to bring someone on to tighten things up.

He said: "The change we thought we would make, and we tried to hold on to make it slightly later, was the one we eventually did make. We had it planned but they scored from a corner kick.

"We thought we would move Steven Gerrard a little bit deeper and get Ashley Young on. I actually thought in the last 10 minutes we did quite well and came in with a few more chances."

Montenegro coach Branko Brnovic conceded that England could have been awarded a penalty in the first half when Danny Welbeck went down in the box, but also argued that Rooney fouled his marker before heading his 35th international goal.

"It is possible that there was a penalty but did you see Rooney before he scored the goal?" said Brnovic.

"I like an attacking strategy, but against England it was not totally the way to go and they showed in the first half how strong they are.

"If we had been complete in our line-up we would have been even more successful."