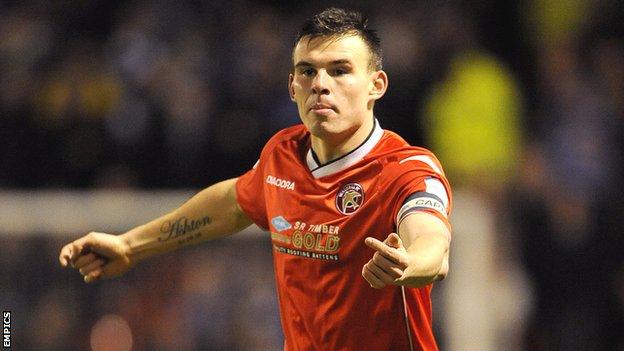 Walsall's influential captain Andy Butler has signed a new contract with the League One play-off chasers.

The Saddlers centre-half, 29, has agreed a new one-year deal, with the option to extend it by a further year.

Butler, signed by boss Dean Smith's predecessor Chris Hutchings in November 2010, has been named Walsall player of the year for both the last two seasons.

"My career has been revived here. I can't praise the gaffer enough," said the former Scunthorpe United defender.

"He's treated me well and is one of the main reasons why I have signed. He's a great manager.

"There are six massive games to go now and, if we continue doing the right things, we will give ourselves every chance of enjoying a successful end to the season.

With how things are going here, I don't want anything to be unsettling

"There are some good times ahead for the club, so I am delighted to be part of it.

"I am happy and enjoying my football here, which counts for a lot.

"I would say I am playing some of the best football of my career," added Butler, who has scored 12 goals in 123 appearances for the Saddlers.

Boss Smith added: "Andy has been fantastic for me. He is a leader of men and commands the total respect of the players, supporters and myself."

Meanwhile, Smith is still to make a decision over who to appoint as his new number two, in the wake of Richard O'Kelly's departure to manage Bristol City in January, closely followed by his replacement David Kelly then making a return to Nottingham Forest, as assistant manager to Billy Davies.

"I've had four or five interviews, but it's got to be the right fit," Smith told BBC WM.

"With how things are going here, I don't want anything to be unsettling.

"When Richard O'Kelly went to Bristol City, Ned Kelly was on the doorstep and it all happened very quickly.

"This one's taken a bit longer, but I just want it to be right."