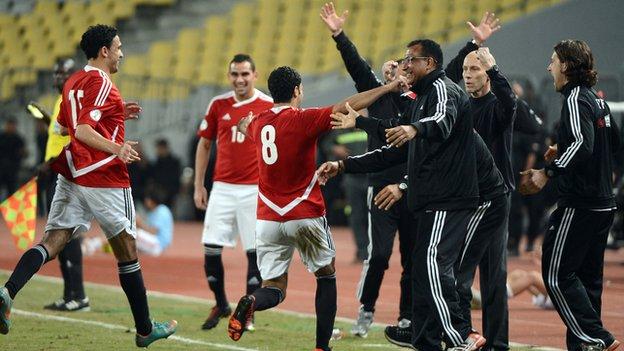 Egypt made it three wins out of three in 2014 World Cup qualifying with a 2-1 win over Zimbabwe.

While Algeria moved to the top of their group with a 3-1 victory over Benin.

Mohamed Aboutrika scored a late penalty to earn the win for Egypt as he netted two minutes from time in Alexandria after Mohamed Salah was fouled.

Egypt had taken the lead when Hosny Abd Rabou scored with a free-kick but Zimbabwe equalised with a Knowledge Musona long-range shot.

The win puts Egypt on nine points at the top of Group G, five points ahead of second-placed Guinea.

And it was watched by 10,000 spectators after Egypt's Ministry of Interior allowed a limited number of fans in to support the Pharaohs for the first time on home soil since the Port Said stadium disaster in February 2012 that left over 70 people dead.

Success maintained Egypt's perfect record, having beaten Mozambique at home and Guinea away last June, and moves them within touching distance of qualifying for next year's tournament in Brazil.

It would be Egypt's first World Cup finals appearance since 1990.

Zimbabwe, who were playing their first competitive match under German coach Klaus-Dieter Pagels, were defeated at home by Guinea and drew away to Mozambique in mid-2012 and are bottom of the table.

Algeria put a disappointing Africa Cup of Nations campaign behind them to overcome visting Benin and leap to the top of Group H ahead of Mali on goal difference.

Valencia's Sofiane Feghouli opened the scoring for the hosts after just 10 minutes.

But goals from Saphir Taider on the hour mark and Islam Slimani in injury time sealed the three points for Algeria.

The second stage of qualifying for Africa has now reached the halfway stage with the winners of the 10 groups advancing to the final knockout stage to decide the five teams who will go the World Cup in Brazil.

There are two more rounds of qualifiers in June.