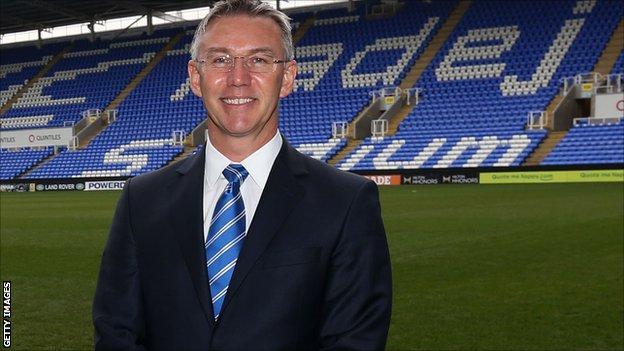 Adkins, who replaces Brian McDermott at the Madejski Stadium, has signed a contract that will keep him at the club until summer 2016.

"I am pleased to be the Reading manager," the 48-year-old said.

"We will take it one game at a time and try to keep this club in the Premier League. It's a good club - I've been impressed with them."

Adkins, who will have former Saints assistant Andy Crosby alongside him in the dugout, added: "We're in the Premier League and we want to stay there. I am excited."

McDermott led Reading to promotion last season, but four successive Premier League defeats left them in relegation trouble - the 51-year-old lost his job on 11 March as a consequence.

Coach Eamonn Dolan took charge for the league match at Manchester United on 16 March, which the Royals lost 1-0. They are currently seven points adrift of safety and second bottom.

Brighton boss Gus Poyet had been in the running for the Reading job but opted to stay at the play-off chasing Championship side, while former Swindon boss Paolo Di Canio was also a target.

Owner Anton Zingarevich was delighted with the arrival of Adkins and said it was an appointment for the "short and long term".

"He has great respect within the game," said the Russian.

"His CV speaks for itself and he has many attributes as a manager, he is progressive, he develops players, his teams play attacking, passing football but most of all he knows how to win games at all levels.

"This is an appointment we have made both with the short and long term in mind and Nigel can take our club forward."

Adkins guided the Saints to back-to-back promotions before he was sacked in January. He also previously managed at Bangor City and Scunthorpe United.

After a trip to Arsenal's Emirates Stadium on Saturday, hiss first home game in charge will be against his former employers, Southampton.

The former Wigan player thanked the players, staff and supporters at St Mary's at Tuesday's news conference before confirming the circumstances of his sacking at the club was "in the hands of the League Managers' Association".

He was dismissed in January, when the south-coast club were three points clear of the relegation zone in their first season back in the Premier League, and replaced by former Espanyol coach Mauricio Pochettino.