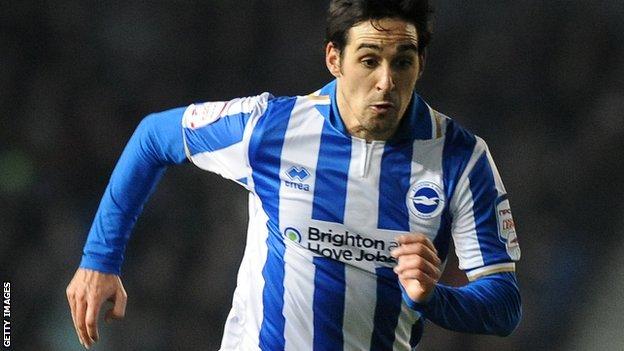 Brighton missed out on the chance to move up to fifth place in the Championship table after a goalless draw against Charlton.

The Seagulls hit the woodwork twice through Vicente and Gordon Greer in stoppage time but could not find their way past Chris Powell's side.

Gus Poyet's Brighton remain in the final play-off spot going into the last six games of the season, two points ahead of Leicester who are in seventh.

Gus Poyet's side dominated throughout, with Wayne Bridge providing an early chance for Leonardo Ulloa, whose shot was blocked by Michael Morrison.

Their best chance of the first half came when a short corner ended with Liam Bridcutt finding Inigo Calderon who could only fire his shot inches wide.

Teenage Charlton winger Callum Harriott tried his luck with an angled strike that tested keeper Kuszczak, before Brighton's Will Buckley saw a free header go wide of the post.

In added time Ben Hamer tipped Vicente's shot onto the crossbar, and from the resulting corner Greer's header came back off the inside of the post.

"Don't take anything away from my players, we deserve to be where we are.

"The game was not difficult to analyse. If I could ask for any more it would be in terms of quality in our final ball. Apart from that, it was all there.

"It really was one-way traffic and it was a great point for Charlton. I had a feeling they would be defensive and solid, and I can't remember the last time I didn't make a change during a game."

"I'm really pleased, it was a great point for us. Brighton is a tough place to come and I knew we would have our hands full, but I felt we had our tactics right.

"Our shape was right, the point and a clean sheet is really pleasing for us following our win last Saturday.

"Going into the game we'd have taken a point and a clean sheet. In the end we could have even nicked it and Ben Hamer also made a crucial save at the death."