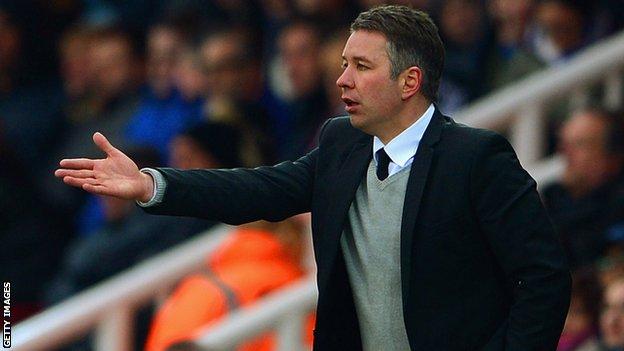 Peterborough missed out on a chance to move out of the Championship relegation zone after a goalless draw at play-off hopefuls Middlesbrough.

The visitors are one point adrift of safety after stretching their unbeaten run to seven Championship matches.

Sammy Ameobi spurned their best chance close to the end, while Joe Newell and Lee Tomlin went closest for Posh.

Middlesbrough spent around four months of the season in a play-off spot but have dropped out of the top six after a horror run of just two wins in 15 matches since the turn of the year.

After a cagey opening, Boro midfielder Grant Leadbitter forced visiting goalkeeper Bobby Olejnik into a smart save midway through the first half.

Justin Hoyte and Rhys Williams also went close as the home side continued to press in a dominant performance before the break.

Peterborough looked to catch Middlesbrough on the break, with Newell blasting wide of the near post after combining with Dwight Gayle in a neat build-up.

Darren Ferguson's men improved after the break as Tomlin launched a shot towards, before Olejnik fumbled Josh McEachran's effort behind at the opposite end.

And on-loan Newcastle striker Ameobi fired over the bar in the dying stages as the hosts had to settle for a point.

"There were a lot of positives but ultimately we are disappointed and frustrated because we didn't win a game we dominated.

"We have to play some of the teams above us in the next few weeks so the play-offs are there for us if we can kick-start it."

"We weren't at our best, particularly in the first half, but once we got to grips with it we did well.

"When not at your best you have to battle away and we did. That's seven unbeaten now and another point so that's not too bad.

"We'll find out at end of the season if that was a good point or not."