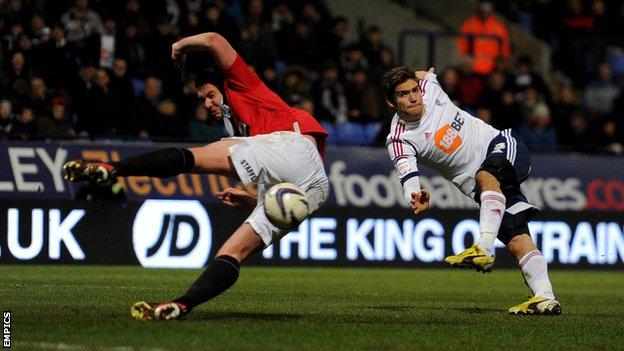 A second-half goal from Chris Eagles helped Bolton beat Huddersfield to move into eighth place in the Championship.

Eagles struck just before the hour to keep Dougie Freedman's men in the hunt for the play-offs and leave Huddersfield in the relegation zone.

Bolton are now four points outside of the top six with six games remaining, while Huddersfield are in the bottom three on goal difference.

The Terriers have lost six of their 10 games

They face a potentially vital home game with fellow strugglers Peterborough on Saturday as they fight against an instant relegation back into League One.

Bolton, on the other hand, were down in 20th position at the start of February but, after losing just two of their last 10 league games, they are now in the running for a place in the top six.

After a tense opening period, Bolton goalkeeper Andy Lonergan had to produce a magnificent reaction save to claw Zat Knight's ill-judged backpass off the goal-line before Huddersfield captain Peter Clarke hit the crossbar.

Alex Smithies produced a stop of equal quality to thwart David Ngog early in the second period before Eagles found the target with his ninth goal of the season.

Marvin Sordell robbed Clarke on the left, burst towards goal and teed up Eagles for a clinical finish.

Lonergan had to save a low shot from Sean Scannell as Huddersfield pushed for an equaliser but Bolton held on to record a fourth straight 1-0 win at home.

"I don't look at the table to be honest with you.

"I just know if we can keep the momentum going then there's a possible chance that people will be looking over their shoulder and that will take energy away from them.

"Therefore it's up to us to control what we can do and if we can play with that same commitment at this time of the season then we're always going to be in there with a chance."

"In all fairness tonight's game was not going to be a season-defining game - it was a marker for the remaining games of the season.

"We've given a good account of ourselves, I thought we controlled it for the most part.

"We created a lot of chances but just couldn't get the killer touch."