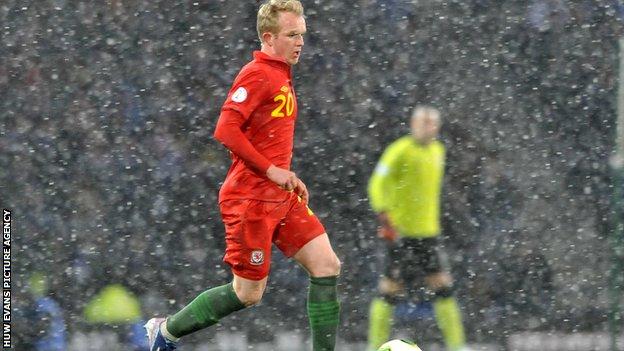 Manager Chris Coleman believes teenager Jonathan Williams has a big future with Wales after his debut against Scotland.

The Crystal Palace midfielder made his Wales debut in the 2-1 victory over Scotland at Hampden Park on Friday evening.

Williams, 19, replaced Gareth Bale, who was ill with a virus, in the Welsh midfield at half-time.

"He has a good future Jonny Williams and he has been exciting this camp," said Coleman.

Williams, who was born in Kent, qualifies for Wales through his Anglesey-born father.

He has already been dubbed Jonny 'Joniesta' Williams by Crystal Palace supporters in homage to the Barcelona and Spain midfielder and due to his height of 5ft 6ins and his passing ability.

Palace manager Ian Holloway has waxed lyrical about the teenager's potential and ability and has even described Williams as "our David Silva".

Williams earned plaudits for his maturity and influence on the Wales side during his first 45 minutes of international football in Glasgow.

Coleman's Wales side are third in Group A, seven points adrift of Croatia, who are level on points with leaders Belgium.

"When you lose Baley out of any team and you are 1-0 down, it can be a psychological blow for you," said Coleman.

"But Jonnie Williams is 19 and he had done a great job for Palace. I know Ian Holloway likes him a lot and I have watched him and studied him a lot.

"I had no qualms about putting him on and I knew he'd be able to handle the situation.

"I just thought he really took the game to Scotland, he kept making those teasing runs through the middle and taking out two or three players and a little slip pass here or there

"For the second goal, he slid Andy King into the box and he is that type of player."

Williams was the second youngest player to represents Wales Under-21s having just turned 17. But suffered a broken fibula in his right leg while on U21 International duty back in November 2011.

He was called up to the Wales senior squad by Coleman to play in the World Cup qualifiers against Belgium and Serbia in 2012 and has been part of the set-up ever since.

"He is a pleasure to have because he is so enthusiastic and he is enjoying it so much and that just rubs off on everybody," added Coleman.