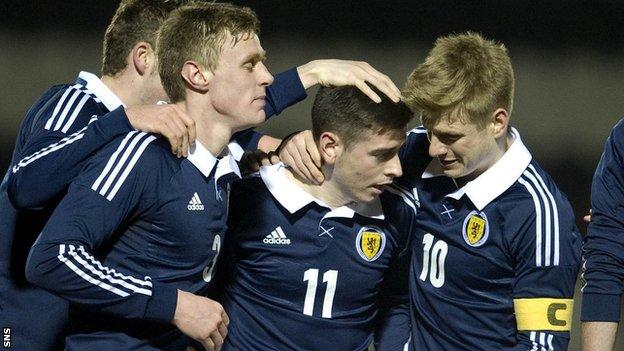 Scotland Under 21s opened their Euro 2015 qualifying campaign with a win over Luxembourg at St Mirren Park.

Lewis Toshney saw his half-volley hit the post before Jamie Walker's sublime volley put Scotland ahead on the stroke of half-time.

And Toshney added a third late on after Pfeiffer fumbled Ryan Fraser's cross.

Scotland's victory was comfortable but it took them until first-half injury time to break down stubborn opponents and sterner tests lie ahead against the Netherlands, Slovakia and Georgia for a place at the finals in Czech Republic in two years' time.

There was an early scare for Billy Stark's side, with Toshney and goalkeeper Jordan Archer leaving a long ball to each other which almost allowed Luxembourg forward David Turpel to take advantage.

But central midfield pair Fraser Fyvie and Stuart Bannigan soon settled into a passing rhythm with team-mates which often reached over 20 exchanges without a Luxembourg touch.

The ever-impressive Stuart Armstrong played just behind striker Watt in a 4-4-1-1 formation, and it was a rare occasion if the Dundee United midfielder was not involved in something of attacking promise for the hosts.

Indeed, it was Armstrong who first set up Walker for a deflected effort wide before he himself struck past the post with a low drive that stayed hit until it met the advertising boards.

Toshney, in front of Dundee manager John Brown who was in the stands, showed a cute touch with a side-foot curler on the half-volley which Pfeiffer turned onto the post.

Hearts midfielder Walker went one better on the stroke of half-time, though, connecting wonderfully on the volley with a ball dropping out of the air to steer it into the far corner from the edge of the box.

The beginning of the second half saw Watt threaten twice, then the introduction of tricky winger Fraser on the hour mark gave the game added interest.

Former Aberdeen player Fyvie stung the hands of Pfeiffer from 25 yards shortly after.

The Luxembourg keeper was at the centre of things again, spilling a Watt shot and then picking up the ball when his defender had passed back to him.

Finnish Referee Dennis Antamo signalled for an indirect free-kick from barely six yards out, which Watt duly struck precisely into the top corner.

And in the closing stages, Toshney was on hand to turn the ball into an empty net when Pfeiffer failed to hold onto Fraser's delivery.